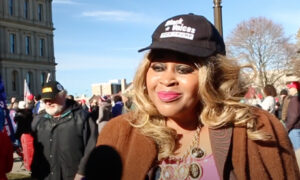 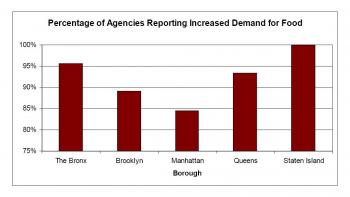 Food Pantries: Overcrowded, But Could Have Been Worse

By Helena Zhu
Print
NEW YORK—Nearly all emergency food providers in all five boroughs of New York City said they experienced an increase in demand for their services over the past year, according to a new study conducted by the New York City Coalition Against Hunger.

While the number of New Yorkers forced to use the city’s soup kitchens and food pantries rose by 21 percent in the last year, about half of the agencies had to turn people away due to lack of food in stock.

Nevertheless, the situation could have been worse without the federal anti-hunger spending of more than $500 million through the economic recovery bill and the Food Stamp Program that was increased in New York City during the same period.

“The economic downturn has created a hurricane of suffering for hungry New Yorkers, but the good news is that a massive increase in federal funding has provided a food life-raft for struggling families,” said Joel Berg, executive director of the Coalition, in a press release.

“While it is obviously appalling that more than half of the feeding programs in the city still need to ration food, the situation is far less catastrophic than it would have been had the president and Congress not increased anti-hunger funding in the recovery act and had not protected the Food Stamp Program as an entitlement that expands when times are rough.”

In addition to stimulus funding emergency food agencies, the federal recovery bill also increased funding for the SNAP/food stamp benefits program and benefits for families participating in the program, thereby encouraging more people to apply. Between September 2008 and September 2009, participation in SNAP rose from 1,297,108 to 1,583,581.

The federal government will spend at least an extra $568 million SNAP/food stamp benefit dollars in New York City this year, on top of the $2.1 billion it was already slated to spend.

“Calling attention to hunger is significant during this season of giving, but in reality, hunger is a year-round crisis. We must increase outreach so there is sustenance on the table for every child, family, senior citizen, and individual that has fallen on hard times,” said New York State Senate Majority Leader Pedro Espada, Jr. (D-Bronx, 33rd District).