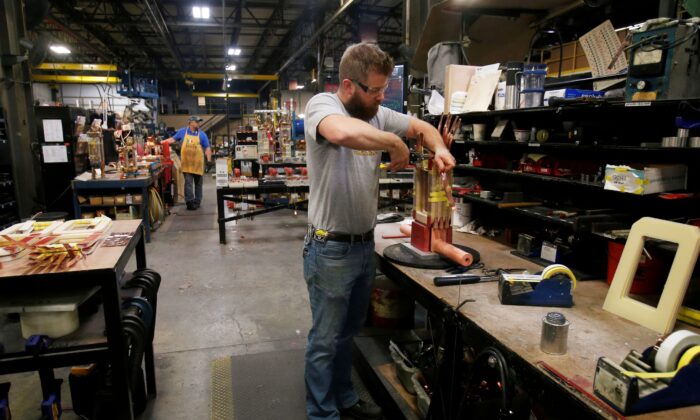 Sub-assembly worker Joel Dykema works on the sub-assembly of a transformer in the RoMan Manufacturing plant in Grand Rapids, Mich., on Dec. 12, 2018. (Rebecca Cook/Reuters)
Inflation

New York state manufacturing activity rose more than expected in December, according to a Federal Reserve Bank of New York report, which also noted the persistence of “substantial” inflationary pressures as both the current and future input price and selling price gauges remain close to record highs.

The headline general business index in the New York Fed’s Empire State Manufacturing Survey (pdf), published Dec. 15, rose to 31.9 from 30.9 in November, beating consensus forecasts for a much lower reading of 25.0.

“The uptick in the Empire State index is a surprise, given that October’s surge came out of the blue; we expected a correction,” said Ian Shepherdson, chief economist at Pantheon Macroeconomics, according to MT Newswires.

The prices paid index, which reflects input costs for manufacturers, edged down 3 percentage points to 80.2, although it remained near its record high of 83.5 in May. The prices received index fell 6 points to 44.6 from November’s record-high of 50.8, with the report characterizing the two inflation-related data points as “signaling ongoing substantial increases in both input prices and selling prices.”

Based on a poll of around 200 manufacturers in New York state, the survey measures price movements from the perspective of industry. Economists typically look to manufacturing prices as an early predictor of consumer price inflation, which surged to an annualized 6.8 percent in the 12 months through November, the fastest pace in 39 years.

The survey’s price indexes suggest persistence of inflationary pressures, with the report coming on the same day as the conclusion of the Fed’s key policy meeting, at which officials revised upward their expectations for future inflation and decided to accelerate the pace of scaling back monetary stimulus to the economy. While the Fed held interest rates steady, officials opted to begin reducing the central bank’s asset purchasing program at double the current pace, to $30 billion per month.

“The Fed is looking to get out of the bond-buying business in double time. Just one month after initiating the taper, they have doubled the pace of withdrawal in an effort to conclude by March so they can raise interest rates sooner,” Bankrate Senior Vice President Greg McBride told The Epoch Times in an emailed statement.

The Fed’s so-called dot plot, part of its revised Summary of Economic Projections (pdf), now projects three rate hikes in 2022, up from the one that was implied in September’s dot plot.

“The Fed retired the word ‘transitory’ from their statement and gave strong indications that they’re poised to hike interest rates once they deem the labor market to be at full employment. Definitely a more hawkish tone, and the most we have seen in some time—similar to inflation,” McBride said.

Fed Chair Jerome Powell said in a statement on Dec. 15 following this week’s policy meeting that the decision to speed up the taper of the stimulus was driven by strengthening labor market conditions and “elevated” inflationary pressures.

“Employers are having difficulty filling job openings, and wages are rising at their fastest pace in many years,” Powell said, adding that the Fed expects the unemployment rate to fall to 3.5 percent by the end of the year.

He said ongoing bottlenecks and supply constraints were continuing to push prices higher, calling the problem “larger and longer-lasting than anticipated, exacerbated by waves of the virus,” adding that inflationary pressures had now spread to a broader range of goods and services.

Inflation has emerged as a key concern among Americans, rising faster than wages, and eroding purchasing power.