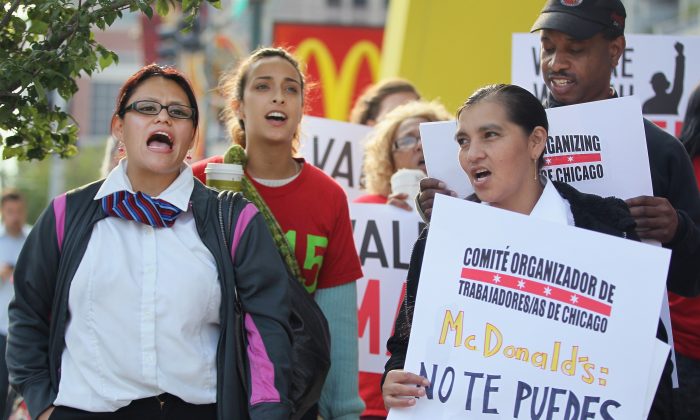 NEW YORK—After decades of decline in membership, unions are hoping to make a dramatic comeback.

In New York City, labor groups have seen their ranks expand for the first time in seven years, according to a new CUNY report. Public sector unions have settled promising contracts with the de Blasio administration, and on Saturday, the Labor Day Parade will feature the non-unionized for the first time, including the increasingly organized fast food workers.

Part of the umbrella of Labor Day activities, fast food workers are scheduled Thursday to protest in 150 cities across the country, walking out of their jobs for a day as a part of a national movement to raise the minimum wage to $15 and unionize service sector workers.

Their efforts have gained momentum following a controversial decision—concerning the definition of a “joint-employer”—by federal regulators that could transform employment practices in the fast food and retail business and open their doors to collective bargaining.

On July 29th, the general counsel of the National Labor Relations Board decided that McDonald’s Corp. was a “joint-employer” in 43 unfair labor practice cases. A similar ruling by the five-member NLRB board—which wields more authority—in a pending case involving a California waste-management company, could affect employment practices in entire industries.

In the status quo, McDonald’s only operates 19 percent of McDonald’s restaurants. Most are run by individual franchisees, who hire, manage, and pay the restaurant workers, and bear the sole responsibility for employment-related liabilities.

For instance, when the state of New York sued seven McDonald’s restaurants for wage-theft, it was the franchisee of those restaurants, Richard Cisneros, who paid the nearly $500,000 settlement, not the franchisor, McDonald’s corporation.

However, dozens of wage-theft lawsuits filed this year in California, New York, and Michigan have targeted the franchisor in their complaints, and pro-labor advocates argue that McDonald’s is responsible for the violations because of the pressure it puts on its franchisees.

On July 30th, University of California Irvine law professor Catherine Fisk defended the general counsel’s decision in a blog post, arguing that because McDonald’s demands that its franchisees uphold a certain “ratio of staff to customers on an hourly basis” and profit margins, it should be considered a joint-employer.

“Because McDonald’s controls minute details of the operation of its restaurants nationwide, it makes sense for the law to recognize that the corporation that actually controls the conditions and the pay be held jointly responsible for the low wages and lousy working conditions,” she wrote.

Treating companies like McDonald’s as the joint-employer of workers at individual franchisee restaurants would ease the way for raising workers’ pay and improving workplace conditions, labor experts say.

“McDonald’s has the money, franchisees don’t have it, [they] are pushed by McDonald’s just like the workers are pushed,” said Kate Bronfenbrenner, director of Labor Education Research at Cornell University. “McDonalds could say ‘we’re going to require that everyone gets breaks, there be health and safety changes.'”

The ruling has been roundly denounced by business associations and franchisees; the Coalition for a Democratic Workplace called the decision “a supersized assault on McDonald’s,” and Carl’s Jr CEO Andrew Pudzer warned in a WSJ editorial that if the McDonald’s ruling was upheld, it “would essentially destroy the [franchising] business model.”

The NLRB is a highly politicized agency. All five board members and the general counsel were appointed by President Obama, who failed to appoint Craig Becker, a lawyer who has worked for SEIU, to the board after a Republican filibuster in the Senate. In June, the Supreme Court ruled that three of Obama’s recess appointments to the NLRB were unconstitutional.

In itself, the power of the NLRB general counsel is limited. The July decision only pertains to the alleged retaliation against McDonald’s workers organizing protests, and does not make McDonald’s liable for general employment practice violations at restaurants.

“If workers come together and talk about their wages, the employer can’t retaliate against them,” said Catherine Ruckelhaus of the National Employment Law Project, a labor advocacy group. “If there’s a joint-employer relationship, you can hold McDonald’s Corp. responsible for the retaliation.”

“The franchise associations are trying to create a sense of urgency and hysteria where there shouldn’t be, joint-employment has been in the statutes since the beginning,” she added.

A McDonald’s employee prepares an order during in San Francisco in this file photo. (Justin Sullivan/Getty Images)

The July decision is widely seen as preview of how the five-member federal board will rule in a case involving the waste-management company Browning-Ferris Industries and a local Teamsters union.

The union argues that it has the right to collectively bargain with Browning-Ferris, despite the fact that its workers are employed by temporary-staffing agency Leadpoints Business Services, because Browing-Ferris is a joint-employer.

“The McDonald’s decision happens to come first and was a clear signal of the way the board was heading, it will surprise everyone if Browning-Ferris comes out very differently,” said Walter Olson, a senior fellow at the libertarian Cato Institute.

Amicus briefs have been filed on behalf of groups representing franchises and retailers before the board, arguing that to label Browning-Ferris as a joint-employer would overturn a 30-year-old standard where, to count as a joint-employer, a company must exercise “direct and immediate” control on matters such as hiring, firing, and supervision.

Such a precedent, the brief filed by Proskauer Rose LLP argues, would “create massive uncertainty throughout large segments of American industry” as companies cancel franchise arrangements “rather than accept such liabilities with no control over the workplace.”

Ruckelhaus dimissed concerns about the legal novelty of such a ruling, saying that joint-employment wasn’t “a new concept,” but has “been in the statutes since the beginning.”

According to Ruckelhaus, a Browning-Ferris ruling in favor of unions could help labor disputes involving wages and hours if agencies like the Department of Labor or Workers’ Compensation Boards decided to use the ruling as a template, a common legal practice called res judicata.

“It’s not a blanket automatic finding, each agency does its adjudication differently,” she said.

Olson expects the treatment of franchisors as joint-employers will have few immediate benefits for workers since the companies will adopt swift changes to avoid newfangled liabilities, which will likely be drawn at “practical lines”—that is, the scope of a joint-employer will be enlarged, but not so much that franchisors would assume full control of their business.

In the scenario that large franchisors like McDonald’s do assume full control of more franchisees, Olson predicts a decline in quality as managers will have less of a stake in the individual restaurants.

“[The franchise model] was founded by trial and error,” he said. “In a huge organization, people who just don’t care as much as local managers … the bathrooms won’t be as clean, employees not as well trained.”

A vertical integration of franchise businesses would better enable collective bargaining on behalf of service sector workers, as striking against individual restaurant owners is inefficient because franchisees are small and numerous, and operate on a low profit margin.

Service sector workers have traditionally been difficult to unionize. The structure of the franchise business is not the only obstacle they face. Service workers have less of a stake in collective bargaining because the turnover rate is so high. The turnover rate also interferes with union activities such as the certification elections.

That could change if the demographics of the service sector shifts more towards older adults with families as opposed to teenagers working their first summer job. A 2013 report from the progressive Center for Economic and Policy Research said that around 40 percent of fast food workers are now 25 or older.

“They’re not teenagers, they’re adults who works with places for a long time,” said Bronfenbrenner.

“From the point of view of SEIU, where else are you going to go? There aren’t many growing sectors of the economy fit for unionization,” said Daniel DiSalvo of the conservative Manhattan Institute. “Most teachers are already unionized, there’s no room for expansion, healthcare has a lot of union penetration.”