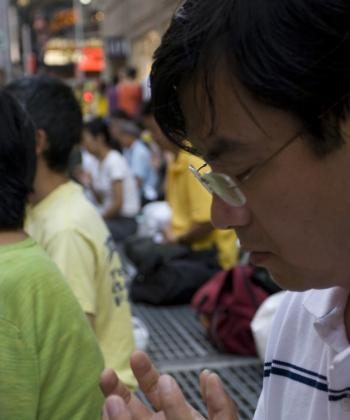 “In two days the Olympics will take place in the same city and country where police are committing torture and crimes against humanity,” said Albert Roman, co-host for the event.

Some practitioners donned yellow shirts and practiced fluid, slow-moving Falun Gong exercises behind a line of banners as several speakers took turns describing the practice and why it’s persecuted in China. Others staged a silent candle vigil as several of the passerbys glanced at the banners and poster boards and took the materials outlining the Chinese regime's persecution against the practice.

Over 8,000 adherents have been arrested in 29 provinces throughout China in the last several months as part of the Chinese Communist Party’s security measures to ensure an Olympics without public dissent. According to the Falun Dafa Information Center (FDIC), of those arrested, 500 individuals have been arrested in Beijing and at least 30 of them sentenced without trial to re-education through labor camps for up to 2.5 years.

China’s RTL (re-education through labor) camps have existed since the 1950s and include dozens of camps. Individuals are sentenced to these camps by police or other security agencies for up to three years without charge, trial, or chance for a judicial review.

According to the U.S. State Department’s 2007 report on human rights in China, “some foreign observers estimated that Falun Gong adherents constituted at least half of the 250,000 recorded inmates” in China’s labor camp system.

Similarly, Amnesty International’s recent report indicates: “In the lead-up to the 2008 Olympic Games, Beijing police have used abusive detention practices such as RTL camps to ‘clean up’ the city.”

Levi Browde, executive director of FDIC, notes that what’s most alarming is the number of people dying just days or even hours after being arrested.

One of the most renowned persons tortured to death in Beijing’s “clean up” has been Yu Zhou, a percussionist for the popular folk music ensemble “Xiaojuan and Residents from the Valley.” His folk band frequently topped the charts, winning the hearts of Chinese citizens. Yu died on February 6 of this year, just eleven days after being arrested for practicing Falun Gong, according to FDIC.

"It is now imperative that the international community leverage real pressure and stop these deplorable actions. The legacy of the 2008 Olympics must not be thousands of Chinese citizens languishing in labor camps," Falun Gong spokesperson Erping Zhang said in a prepared statement that was read out by one of the representatives.

The Dangers of Communism

Marco Sepulveda, a resident of Flushing, NY who moved from Cuba to the United States when he was five, is familiar with suppressive Communist regimes. He was walking through Times Square when he noticed the rally and stopped to express support. No matter who you are – Falun Gong, a black person, a white person – you have rights, he said. Marco has followed news about CCP-mobs that have verbally and physically attacked Falun Gong practitioners in Flushing since May 17. With furrowed eyebrows, he complained, “Those in the Chinese Communist Party need to either go back to China or be jailed.”

Sepulveda, who learned of the recent violent events in Flushing from the Epoch Times, had harsh words for the perpetrators.

“There was a lady [in Flushing] who practiced Falun Gong who had two sons in the military, and one of them came back to find that his mother was beaten up. The [CCP attackers] were so vicious that they started hitting women. If I were [the son], I would try to find out who that was from the CCP. I would not tolerate that.”

Speaking to the attackers, Marco challenged, “if you like the CCP, why did you leave China? Because this is definitely not a Communist country in any way, shape, form, or fashion.”