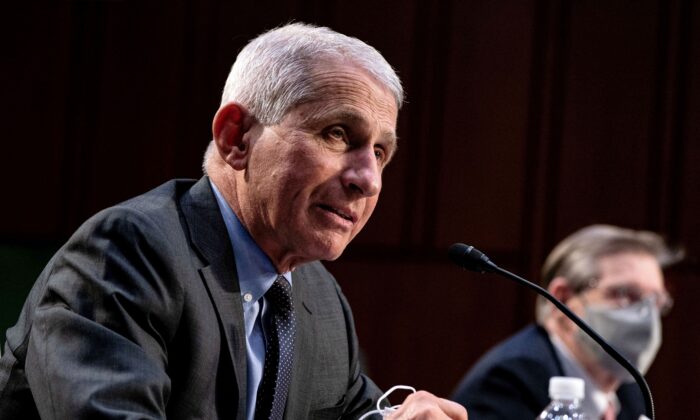 Dr. Anthony Fauci, director at the National Institute of Allergy and Infectious Diseases, speaks during a Senate committee hearing on the COVID-19 response, on Capitol Hill in Washington on March 18, 2021. (Anna Moneymaker/Pool/Getty Images)
NY News

“That’s obviously a delicate situation in New York. I really don’t want to be out there outguessing the mayor, who I’m sure is trying to do what’s best for the city,” Fauci, the chief medical adviser to President Joe Biden, said on Fox News.

New York Mayor Eric Adams, a Democrat, on Thursday announced that all private and city workers must continue providing proof of COVID-19 vaccination but that athletes and performers are exempt from the requirements.

“He made that decision to pull back on the requirement for vaccination for certain entertainers and sports figures and some of the athletic teams. There is a pushback on that, that that might be unfair to others. But I’m not there on the ground in New York. I don’t have a good feel for what the situation is. So, it really is a tough problem,” said Fauci, a native New Yorker who has headed the Maryland-based National Institute of Allergy and Infectious Diseases since 1984.

Adams said the exemption was the result of balancing safety and a need to drive business to concert and sports venues.

“This is about supporting our local vendors, our local stores and performers,” Adams told a briefing from CitiField, the New York Mets’ home field.

The mayor expanded an exemption his predecessor, Bill de Blasio, put into place. That exemption applied to athletes and performers who visited New York, but not to those who reside in or play for teams based in the city.

Adams drew widespread criticism for keeping the mandates in place for all other private and city workers, which he claimed was necessary to prevent the city from locking down again.

COVID-19 cases in New York are down 96 percent from a peak in January, and just 11 patients were admitted with COVID-19 to hospitals on March 24.

Additionally, vaccines have proven increasingly ineffective against preventing infection, though they have held up better against severe disease.

After news of Adams’ announcement spread before he formally declared the move, union leaders said the disparate treatment of workers didn’t make sense.

“We can’t have a tale of two cities here in New York,” Paul DiGiacomo, head of the Detectives’ Endowment Association, said on CBS. “If athletes and performers don’t have a vaccine mandate, the detectives risking their lives to keep them safe shouldn’t either.”

Some called on the mayor to hire back the approximately 1,400 city workers who were fired for refusing a jab.

“Not at this time,” Adams said. “At this time, we are not reviewing if we’re going to bring back those—a large number with they were hired with the understanding they had to be vaccinated, they understood that, and they decided not to do so. So at this time, we’re not entertaining that.”

Fauci said he did not “want to be taking sides” on the move.

“I think that the mayor had a difficult decision to make, as you mentioned, when you introduced the topic,” he told host Neil Cavuto when pressed on why only certain workers would not need to get vaccinated. “There’s been a lot of pushback on that. Because some are seeing it as unfair. You can understand that. But you also have to look at the mayor’s side. Again, it’s a tough call. It’s really a tough call.”