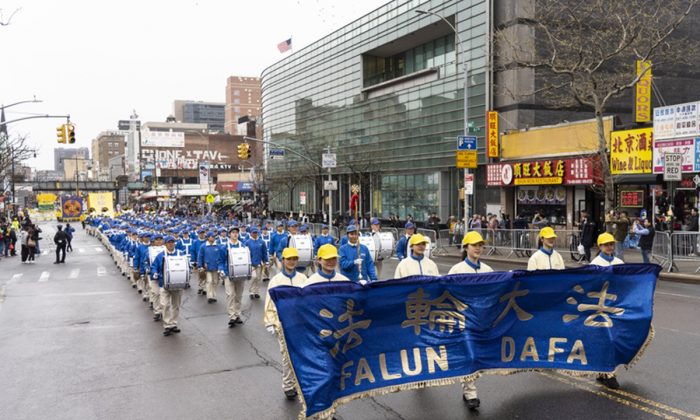 20 years after practitioners in China first appealed to the Chinese regime for their right to practice, New York Falun Gong practitioners call for an end to the persecution with a commemoration parade in Flushing, Queens, New York City, on April 20, 2019. (Edward Dai/The Epoch Times)
China Human Rights

Twenty years ago, roughly 10,000 adherents of Falun Gong gathered outside Zhongnanhai, the central headquarters of the senior leadership of the Chinese Communist Party located in Beijing, to appeal for the right to practice their faith.

Despite the practitioners’ pleas on April 25, 1999, the Chinese regime launched a nationwide persecution of the spiritual discipline that, according to a government survey, was practiced by 70 million to 100 million Chinese citizens at the time.

Practitioners across the country were arrested and thrown into detention facilities and labor camps, where they often endured torture. Human rights groups estimate that thousands of Falun Gong adherents have died as a result of the persecution.

In Flushing, New York, on April 20, Falun Gong practitioners in the New York area held a rally and parade to commemorate the courage and bravery exhibited by Chinese practitioners 20 years ago, and to raise awareness about the human rights abuses still being committed in China today.

Olli Torma is a Falun Gong practitioner and IT consultant originally from Finland.

“I think that I underwent a pretty big transformation when I started practicing,” Torma said, adding that he attended the Flushing event to help “people understand what Falun Gong practitioners are still struggling against.”

Torma explained that he used to be a very cynical person, but practicing Falun Gong changed his personality overall for the better, giving him a deep appreciation for tradition and spirituality. It also helped him to give up bad habits such as substance abuse and heavy drinking.

Along with the teachings laid out in the practice’s texts, Falun Gong involves five slow-moving, meditative exercises.

“It’s based on truthfulness, compassion, and tolerance,” said practitioner Babak Baniasadi, who works as a chef.

Baniasadi said he hopes the event can help clear up misconceptions about Falun Gong in the Chinese community.

“The Chinese Communist Party has spread a lot of propaganda demonizing Falun Gong for their own selfish reasons, and we’re here to clear up some of those misconceptions, and let people know we’re good people,” he said.

Chinese state media portrayed the 1999 appeal as an effort to “besiege” the central government, as part of the Chinese regime’s campaign to vilify the practice and justify the regime’s persecution.

But Falun Gong practitioners had in fact gathered to petition the Chinese regime for legal status and for an end to harassment, after riot police had beaten and arrested 45 practitioners in neighboring Tianjin City days before.

When 10,000 practitioners arrived in Beijing to appeal, police directed the demonstrators to cross the street away from the central government appeals office, where they initially had gathered, and line up around Zhongnanhai.

“We’re here to remind everyone of that peaceful appeal, and that Falun Gong practitioners should have the right to practice. Unfortunately, today in China, they still don’t,” practitioner Andrea Hayley-Sankaran said.