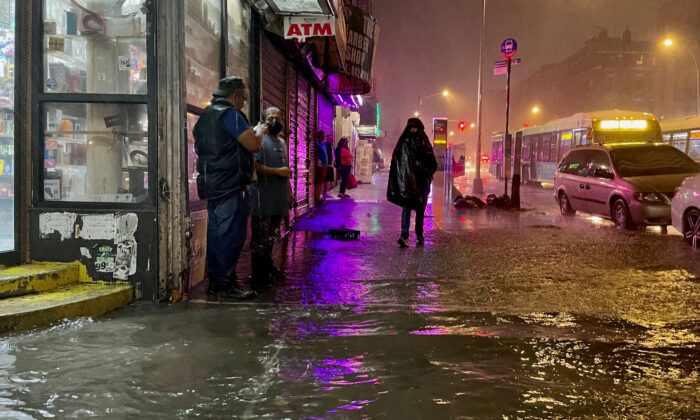 People make their way in rainfall from the remnants of Hurricane Ida in the Bronx borough of New York City on Sept. 1, 2021. (David Dee Delgado/Getty Images)
New York

The remnants of Hurricane Ida battered mid-Atlantic states on Wednesday, with powerful winds and torrential downpour causing major travel disruptions across the region and prompting a flash flood emergency to be issued in New York City for the first time.

The National Weather Service (NWS) confirmed at least one tornado and reports on social media showed homes reduced to rubble in Mullica Hill, a southern New Jersey county just outside of Philadelphia.

At least two deaths from flash flooding were confirmed on Thursday morning in New Jersey’s Passaic city. Flooding was also confirmed at Newark Liberty International Airport as the storm moved into New York on Wednesday night.

New York Gov. Kathy Hochul declared a state of emergency for the entire state and urged residents to stay at home amid the torrential downpour.

“It’s catastrophic levels of water, and we need to keep people off the roads,” the new governor told NY1 shortly after midnight on Thursday. “The subway system is a raging flood in some parts, and it’s a frightening sight. And I want people to be safe.”

A travel ban on all non-emergency vehicles in the city has also been imposed until 5 a.m.

New York City Mayor Bill de Blasio earlier on Wednesday evening declared a state of emergency and urged people to stay off the subways and roads.

“We’re enduring an historic weather event tonight with record breaking rain across the city, brutal flooding, and dangerous conditions on our roads,” the mayor wrote on Twitter.

New York’s Central Park recorded some 3.15 inches of rainfall in in one hour, according to the NWS, far exceeding the 1.94 inches of rain that fell in the same time frame during Tropical Storm Henri on Aug. 22, which was at the time believed to be the most recorded in the park.

Flight disruptions were reported at New York City airports LaGuardia and JFK, while the entire subway system for the city was either severely limited or suspended due to the severe weather conditions and flooding.

“Train service is extremely limited, if not even suspended, because of heavy rainfall and flooding across the region,” the Metropolitan Transportation Authority advised customers in an email alert late on Wednesday.

A tornado warning was issued earlier by the NWS for several neighborhoods in the Bronx, after radar determined a tornado had formed.

Hochul told CNN late on Wednesday that the storm was devastating “far more than anyone expected,” adding that “we can’t guarantee [the subway] will be up and running by tomorrow.”

She said that at least 31,000 households, mainly in Long Island, had no power, and that swift water rescue teams had been deployed. She told NY1 that she wasn’t aware of any injuries at the time.

New Jersey Gov. Phil Murphy also declared a state of emergency in all 21 counties, urging people to stay off the flooded roads.

And in Maryland and Virginia, high water forced some from their homes.

The NWS said a flash flood emergency will remain in place in areas including New York, Brooklyn, and Queens until 3 a.m.

“This emergency was issued due to the ongoing life threatening flash flooding. The heaviest rain has pushed east of the Flash Flood Emergency area, with more moderate rainfall the next few hours,” it said in its latest update.