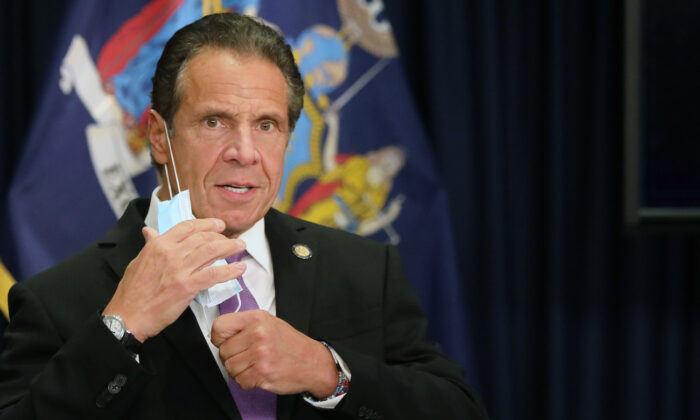 New York has confirmed its first case of the UK COVID-19 variant on Monday in a man who has no known travel history.

“The Wadsworth Lab has confirmed New York State’s first case of the U.K. variant (B.1.1.7) of the virus that causes COVID. An individual from Saratoga County, New York, tested positive for the strain. The individual had no known travel history,” Gov. Andrew Cuomo, a Democrat, said in a statement.

The man in his 60s was “symptomatic but he is on the mend and he’s doing better,” the governor said in a press call. “He did not travel recently, so this suggests that it’s in the community, it was community spread as opposed to having traveled to the UK.”

The same UK strain has been confirmed in Colorado, California, and Florida. Scientists believe the variant is at least 50 percent more contagious than other prior strains but is no more severe in symptoms and mortality. They also believe that the vaccines now being distributed will still be effective against it.

The New York State case is linked to a jewelry store. Cuomo urged anyone who visited N. Fox Jewelers at 404 Broadway between Dec. 18 to 24, 2020, to contact the state’s department of health and get tested immediately.

“From a public health point of view now it’s about contact tracing, and this UK strain is reported to be 70 percent more contagious than the normal COVID strain,” Cuomo said. “So, we want to make sure we’re doing everything we can to do effective contact tracing on this case.”

The store has been closed since Dec. 24.

The B.1.1.7 variant has also been identified in 33 countries. It was first detected in September, World Health Organization officials previously said.

The UK has seen its number of cases surge, and Prime Minister Boris Johnson on Monday announced a national lockdown to take effect on Tuesday. As of Monday, there were 26,626 COVID-19 patients in hospitals in England, an increase of more than 30 percent from a week ago. That is 40 percent above the peak number of infections reported in the spring.

The UK’s chief medical officers warned that without further action, “there is a material risk of the National Health Service in several areas being overwhelmed over the next 21 days.”

The B.1.1.7 variant is one of two more contagious COVID-19 variants that have recently emerged, according to the Centers for Disease Control and Prevention (CDC).

South Africa has seen the other highly contagious variant, called B.1.351, driving its latest spike of cases, hospitalizations, and deaths. The B.1.351 variant has also been detected in Zambia and is the “predominant” one in the country as of December 2020, according to the CDC.

“Currently, there is no evidence that these variants cause more severe illness or increased risk of death. New information about the virologic, epidemiologic, and clinical characteristics of these variants is rapidly emerging,” the CDC said on its website.

“Currently there is no evidence to suggest that this variant has any impact on disease severity or vaccine efficacy,” the agency said of both variants.

It is not unexpected for viruses to mutate to new variants but the concern is that the mutations will become significant enough to resist currently available vaccines at some point.