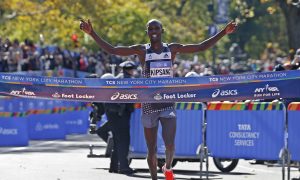 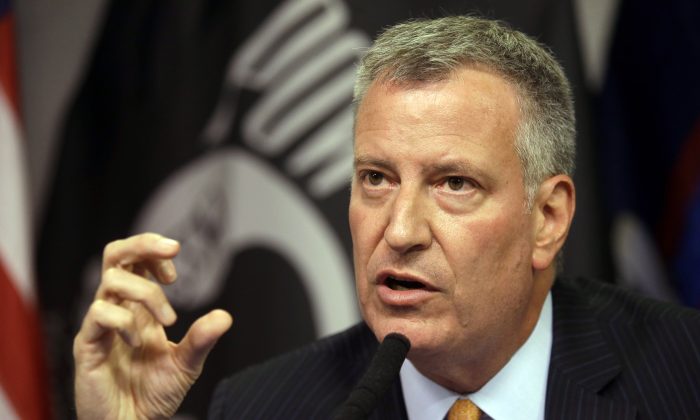 NEW YORK—Mayor Bill de Blasio is having a really bad summer, unable to shake a media-driven perception that the Big Apple’s crime-and-vagrant-filled days are returning.

Homicide and homelessness numbers are up only modestly but that hasn’t stopped almost daily tabloid pictures of bedraggled men urinating in the streets or bathing in public fountains. One tab has adopted the standing headline “Rotting Apple” and launched a website — deblasio.fail — that counts down the hours until his term ends at the end of 2017.

What to Know About your Next NYC Rental

All of that comes amid a series of political setbacks, including a dispute with Uber that made him the target of millions of dollars in attack ads and an about-face on hiring new police officers that seemed like a cave to his police commissioner and City Council.

And most notably, there was de Blasio’s diatribe against the governor, which only heightened the tension between the two men that has now spilled into a turf war amid a deadly Legionnaires’ outbreak in the Bronx.

While the mayor’s allies have steadfastly defended his record, de Blasio’s sudden losing streak has taken a toll, sending his poll numbers plunging.

“He should be very worried,” said Kenneth Sherrill, professor emeritus of political science at Hunter College. “He’s in some trouble and you can’t just say, ‘In two years I’ll be fine.'”

A Quinnipiac University poll released this week found the percentage of New Yorkers who disapprove of de Blasio’s job performance has increased to the highest point since he took office in January 2014. And only about one-third of those surveyed say their quality of life is “good” or “very good,” a record low for the poll, which has been asking that question since 1997.

A City Hall proposal to cap Uber’s growth over concerns about traffic congestion led the ride-hailing service to blanket the city with ads that accused de Blasio of turning his back on the minority residents of outer borough neighborhoods who struggle to find traditional yellow taxis.

The administration appeared caught off-guard by the onslaught and eventually punted, extracting a few concessions from Uber in exchange for tabling talk of a cap. That crisis may have passed, but the mayor is locked in near-daily feud with Gov. Andrew Cuomo that shows little sign of relenting.

Cuomo has frequently thwarted de Blasio’s agenda and provided little vocal support for the mayor’s plans during this year’s state legislative session. De Blasio, who had largely bit his tongue over the governor’s perceived slights, eventually broke his silence and blamed the governor for not acting “with New York City’s interests at heart.”

“(He) keeps playing out in ways that I think sometimes are about deal-making, sometimes about revenge,” de Blasio said. “I have been disappointed at every turn.”

Though many of the mayor’s allies defend de Blasio’s outburst, saying he needed to send a signal that he wouldn’t be bullied, it is clear that his decision to fight back hasn’t reduced any tension. The two administrations have even bickered this week during a public health crisis, holding competing news conferences during the Legionnaires’ outbreak that has killed 12 people.

Discussions were held before the outbreak to plan an event where the men would make a joint appearance as a public display of reconciliation, but those talks have been postponed, according to a city official familiar with the plan who spoke to The Associated Press on condition of anonymity because the official was not authorized to speak publicly on the matter.

The strain apparently has taken a toll on de Blasio, who has appeared snippy at recent news conferences and has taken pains to put seemingly disturbing statistics in context.

Homicides have gone up 10.1 percent, but from historic lows — from 178 to 196 — from this point a year ago. Meanwhile, the number of homeless in shelters has also risen to 56,000 from approximately 52,000 when de Blasio took office.

The mayor’s aides have pushed back against the perception that de Blasio is faltering, noting that his 2015 accomplishments — like ramping up his affordable housing plan — produce fewer immediate tangible results than last year’s centerpiece, the launch of universal prekindergarten.

“People said the mayor would never be elected, and he was,” press secretary Karen Hinton said. “The mayor is a straight ahead, get-the-job-done practician. He will keep doing what he’s been doing, and New Yorkers will see the results.”

There are myriad signs that de Blasio can rally. His support among his base — namely blacks and Latinos — has slipped some but remains high. The city is overwhelmingly liberal and it usually takes a calamity for an incumbent Democrat to lose. And his poll numbers have previously rebounded after clashes with charter schools and the police unions.

“This is not the death knell by any stretch of the imagination,” Zaino said. “But it should be a wake-up call.”