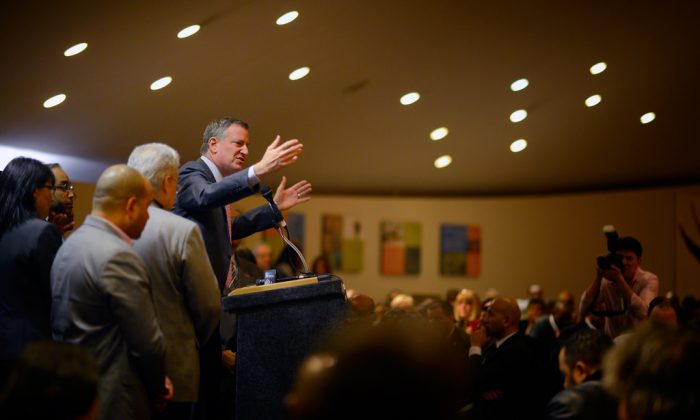 NEW YORK—Almost three months into his administration, Mayor Bill de Blasio has yet to appoint the head of Superstorm Sandy recovery. Though de Blasio’s other appointments have ranged from public affairs staff to heads of agencies, there’s been no mention of who might run the city’s more than $3.2 billion worth of Sandy recovery work.

There are a few likely choices, some more obvious than others.

Dan Zarrilli, who has served as the director of resiliency for the Mayor’s Office of Resiliency since 2013, is the most obvious choice. Zarrilli is a holdover from the previous mayoral administration. He is well-regarded among his colleagues and peers in the recovery, resiliency, and waterfront arenas and is skilled at interacting with the public.

He is also a diplomatic and polished professional who is adept at working with the city’s Economic Development Corporation, a key partner in the city’s long-term resiliency and recovery efforts. Zarrilli has often presented to and interfaced with the community on a number of potential projects in the past year, notably the controversial Seaport City, which would create multi-use levees along Manhattan’s Lower East Side down to the tip of the island.

Zarrilli does not, however, fill the diversity criteria that de Blasio has passionately advocated. Though highly qualified, he would be a more traditional and safe choice.

A dark horse candidate for the head of Sandy recovery is Amy Peterson, president of Nontraditional Employment for Women (NEW). The organization works to prepare, train, and place women in careers in nontraditional jobs such as skilled construction, utility, and maintenance trades.

Peterson, who has been with NEW since 2007, has a strong background in contracting, construction, design, and human resources administration. Some of her previous positions included working for the Lower Manhattan Development Corporation, the New York City Human Resources Administration, and the NYC Department of Design and Construction.

Anthony Shorris, a current deputy mayor in the de Blasio administration, is also oft-noted as the possible heir apparent to heading Sandy Recovery.

The former executive director of the Port Authority of New York and New Jersey, Shorris has worked in city government since 1978 and is currently in charge of managing day-to-day city government operations and the provision of core services throughout the five boroughs.

He has made numerous appearances on behalf of the city so far, and seems to have his finger on the pulse of the current status of Sandy recovery.

Shorris’s long career in the public and private sectors includes leading Princeton’s Policy Research Institute for the Region and as the chief of staff of the NYU Langone Medical Center.