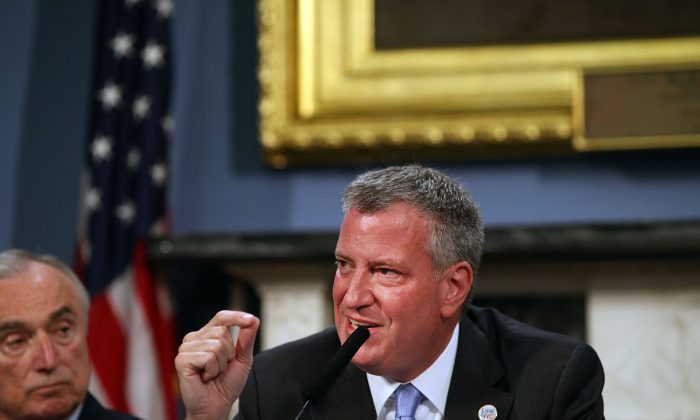 New York City Mayor Bill de Blasio is turning to Chicago for lessons in how to combat Gotham’s rising gun violence—Chicago, where black teens kill each other at four times the rate as they do in New York.

De Blasio and the City Council will spend nearly $13 million on an initiative that treats gun violence primarily as a public health problem, rather than a law-enforcement one, a concept championed by epidemiologist Gary Slutkin and implemented most famously in the Windy City.

Equally central to the public health concept, the teams refer gang members to case-management and other social programs, such as job-training, mental health, and legal services—precisely the type of efforts that made up the city’s default response to crime before 1994, when the New York Police Department began seriously enforcing the law.

The violence-interrupter program is already operating as a pilot in five NYPD precincts; it will now be expanded to 14. Proponents attribute a 66 percent decrease in shootings in a small area of Crown Heights to the pilot effort. There’s reason to be skeptical about this claim, especially regarding the replicability of such alleged results citywide. Chicago is simply not an encouraging model of crime reduction, to put it mildly.

And the great lesson of New York’s historic crime decline is that the best way to change criminal behavior is to increase the likelihood of apprehension, through data-driven deployment tactics and proactive officer interventions. Social services have a dismal track record of overcoming the effects of family breakdown and a pathological gang culture. Their main effect is to pump taxpayer dollars into feckless “community-based” social-service groups, whose employees are often just a baby-step away in functioning from their clients, but which provide get-out-the-vote footwork for City Council members.

The best rationale for this new social-service slush fund would be if it buys de Blasio credit with the City Council and allows him to re-energize proactive policing—maybe even to reassure police officers that he will not demonize them for engaging in pedestrian stops. Shootings are up 27.5 percent in the four weeks ending Aug. 3, and up 12 percent this year overall, while stops are down close to 100 percent in some precincts.

New York appears to need to relearn its own history: crime control means sending the message to criminals that they are being watched and will be stopped and questioned for suspicious behavior.