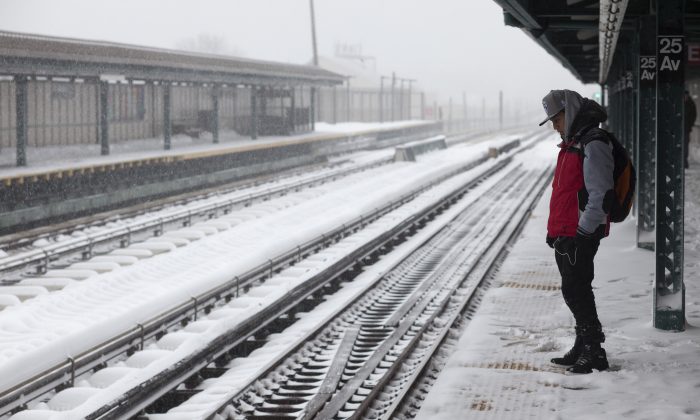 A man waits for a D train at the snow-covered 25th Avenue stop in the Brooklyn borough of New York on Saturday, Jan. 23, 2016, in New York. Service at above-ground stations was suspended later in the day due to a blizzard. (AP Photo/David Boe)
New York

The New York City travel ban was lifted at 7 a.m. Sunday, while trains and buses around the boroughs resumed service.

The ban commenced on Saturday afternoon and effectively prohibited people from driving on all roads in the city and most on Long Island.

The ban started around the same time as subway, bus, and regional rail service was suspended.

Governor Andrew Cuomo later announced that the ban would be lifted at 7 a.m. on Sunday after workers worked through the night to clear roads.

Limited bus and subway service started at 6 a.m., although the regional rail services of Long Island Rail Road and Metro-North is still suspended.

“Some outages remain as crews, assisted by heavy duty snow equipment continue that work,” the MTA noted. “Service will be restored as conditions warrant throughout the day.”