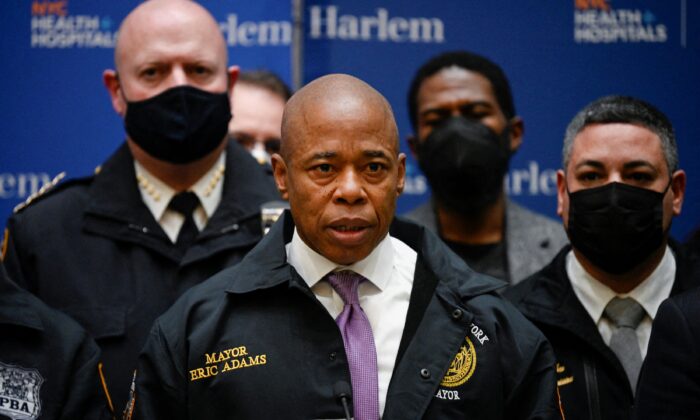 New York City has a plan to phase out COVID-19 vaccine passports and mandates in the coming weeks, said Mayor Eric Adams on Wednesday.

“I can’t wait to get it done … I’m not going to get ahead of the science because I’m ready to get ahead of all of this and get back to a level of normalcy,” Adams said in response to a question about whether his office will phase vaccine passports out.

The Democrat mayor did not provide a firm timetable on when vaccine passports would be rescinded. However, Adams’s comment was the most definitive that he’s made about removing the system, which went into effect in September 2021 under former Mayor Bill de Blasio’s administration.

Several days ago, Adams also signaled that he wanted to remove the passport system, which impacts restaurants, gyms, theaters, and similar venues, when he responded to a question about Brooklyn Nets superstar Kyrie Irving, who is not vaccinated for COVID-19 and as a result, cannot play in Brooklyn or even enter the Barclays Center.

“I think it’s unfair, and I’m not sure if a Boston fan created this rule, I don’t know. I’m really, really leery about sending the wrong message,” Adams said. “Having this city closed down again keeps me up at night. The rule was put in place, to start changing it now would send mixed messages. So I’m struggling with this, just to be honest.”

Adams’s comments came after several cities and municipalities have opted to remove their vaccine passports. On Wednesday, Chicago Mayor Lori Lightfoot announced that mask and vaccine requirements will be scrapped for certain locations starting Feb. 28.

“Thanks to your compliance, we were able to keep people safe, bump up our vaccination rates, and keep our economy open,” she said.

After nearly two years of strict rules, several Democrat-run states including New Jersey, Delaware, Connecticut, and New York began easing vaccine and masking mandates, which prompted speculation that such decisions were fueled by an increase in public animus toward them.

“When you use the word ‘politics,’ I’m not sure it’s that. I just think at the local level, there’s a strong feeling of needing to get back to normality,” White House COVID-19 adviser Anthony Fauci said during a Feb. 15 interview on whether politics played a role in their decision-making. “Now, if you look at the science of it, I mean the direction is going in the right direction. Are we there yet in every single place throughout the country? I don’t believe so.”