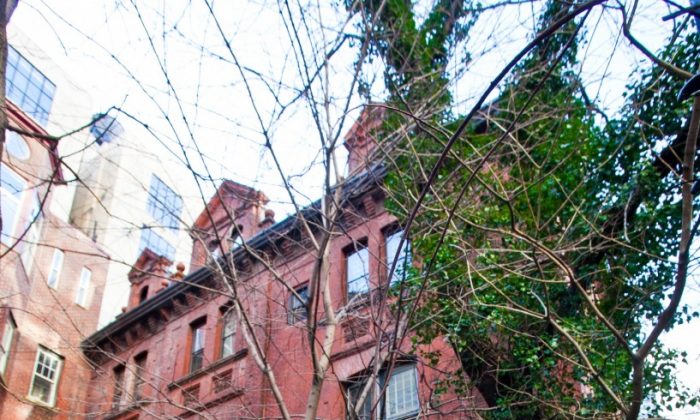 NEW YORK—On West 68th Street, a short distance away from Central Park, sits a building with a curious history.

August Zinsser built a house in 1880 for nearly $100,000 on the corner of Tenth Avenue and 58th Street. “This place,” said Mr. Zinsser, according to a 1895 New York Sun article, “lacks nothing to make it the finest residence locality in New York.”

However, despite high ground, a view of the East River, and respite from malaria and mosquitoes, Zinsser decided to move. The area had become crowded and industrial, bringing noise and pollution.

The final straw came when women, mistaking his home for the nearby, newly built maternity hospital, would climb his steps with admission applications.

Zinsser then paid about $50,000 to move his mansion—4,675 brownstones and about half a million bricks—ten blocks north and almost two avenues west to 14 West 68th Street, brick by brick.

His friends caught wind of the move after Zinsser tried to keep it quiet.

“I’ve got a quiet place now, anyways,” Zinsser said to his friends when they congratulated him, according to a digital scan of the article found on the Fulton History website.

The brownstone was erected in 1895 with a partially connected addition in 1925.

“The building’s age, material, style, details, and scale are among the features which contribute to the special architectural and historic character of the Upper West Side/Central Park West Historic District,” says the Landmark Preservation Commission in a June 2009 document.

Next to the building, a gated terraced garden, with a cobblestone fountain in the center, provides shade.

The structure now has 12 apartments, an elevator, and a laundry room. The latest rental price for a studio apartment is $2,200.

Queen Anne architectural style was used for the brownstone. The style, born in the Victorian Period (post-1860) became popular again in the 1980s. Features include varying roof shapes, wrap-around porches, and large windows.

“A wondrous projecting bracketed copper cornice hover, benignly, over brick limestone and terracotta,” states the AIA Guide to New York City. “Raise your eyes, it gets better as it goes up.”