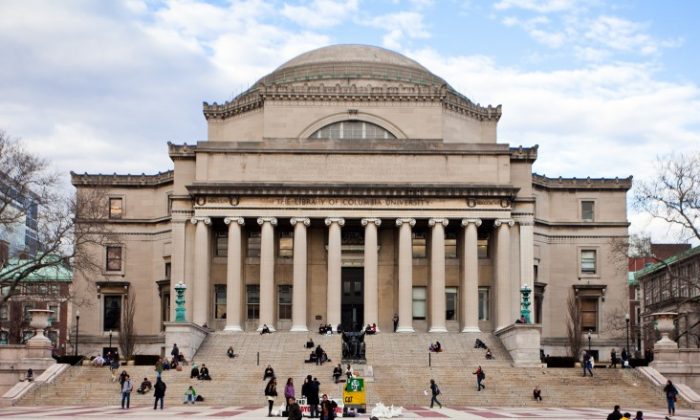 The Low Memorial Library, known as the focal point of Columbia University's campus, was the first structure erected after Columbia settled in Morningside Heights. (Amal Chen/The Epoch Times)
US

NEW YORK—”An excellent expression of the neo-Classical style, the monumental domed building is the focal point of the campus,” proclaims a Landmarks Preservation Commission document, referring to the Low Memorial Library, “and its imposing interior, dominated by a vast central hall with rich, classically inspired ornament, ranks as one of the finest monumental spaces in New York City.”

Columbia College moved three times before settling on the Morningside Heights campus in 1897. The Low Memorial Library was the first structure erected on the new campus.

Modeled after the Pantheon in Rome, the library only acted as a library until 1934. Its Great Hall, originally a reading room, contained bookcases for 12,000 books. A room underneath the reading room housed 150,000 books, while another 16,000 could be found at the galleries above. Full capacity? Almost two million volumes.

The university attempted to find a working delivery system. They tried 10,000 feet of pneumatic tubes, and subsequently, dumbwaiters. Both methods failed.

“The large central space never really worked as a library reading room,” states a U.S. Department of the Interior document. “The library was much more successful as a ceremonial space and administrative offices, and since 1934, this civic monument has been used for exhibitions, convocations, and a reception area. King George VI of England, Winston Churchill, and Queen Juliana of the Netherlands were all welcomed here.”

Seth Low, a Columbia graduate, mayor of Brooklyn and Manhattan, and Columbia president, donated funds for the library, in honor of his father Abiel Abbot Low.

Classical architecture was popular at the time, and McKim, Mead & White had a stellar reputation and significant influence, especially in New York. They designed many structures in the city, of which approximately 75 are designated city landmarks or are in city historic districts.

A diverse set of materials used to construct the building include green Vermont granite, gilt bronze, and Istrian marble, along with concrete.

Classical references abound inside and outside the library. On the steps leading to the building, a statue of Alma Mater sits. Inside, statues of Greeks philosophers Euripides, Demosthenes, Sophocles, are beside the first Roman emperor Augustus Caesar. Nearby inscriptions say: “law” and “philosophy,” as well as “theology” and “medicine.”

Doors of bronze and glass open to an interior that “has the same classical monumentality as the exterior,” states the document. Imposing granite columns border the central hall, which is crowned by a sky-blue dome, 105 ½-feet high.

In 1967, the building was named a city landmark, and two decades later, a national landmark.

“The Low Memorial is one of the most important Classical structures in America,” says the commission document, “and is one of McKim’s masterpieces.”