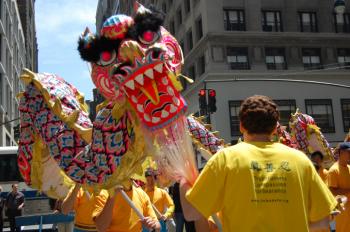 A dragon dance, 'a beautiful collaboration' between Westerners and Chinese, was part of the parade.(Shar Adams/The Epoch Times)
US

Gidon Belmaker
Gidon Belmaker is a former reporter and social media editor with The Epoch Times.
View profile
Follow
biggersmaller
Print
NEW YORK—The night's snowstorm gave way to a calm, sometimes sunny day. The fact that school was closed made Thursday a perfect opportunity to play outside and build snowmen and other snow creatures.

This was exactly the magic that organizers in Friends of The High Line had hoped to create when they decided to organize the first snow sculpt-off, a snow sculpture competition in the elevated High Line Park.

Fourteen teams of all ages took part. Among the sculptures were families with children, college students, and grownups looking to have fun.

“We wanted to do something fun,” said Robert Hammond, Cofounder and executive director of Friends of the High Line. The organization was looking for a long time to find a way to bring more people to the park during the winter. They waited for a good snow day and scheduled the event just a day before.

Announcement of the event went on mailing lists and through word of mouth. They plan to make this an annual event.

Michelle Roth came with her husband and two children, ages 7 and 11, to the park. They are residents of Chelsea and often come to events organized by Friends of The High Line. With the help of a few tools, they created a model Empire State Building, with the real one towering in the background.

Originally, they planned to build the White House or the Lincoln Memorial, she said, adding that her kids “think big.”

Busy toiling away on their model, the kids were not available for comment.

An iPod Touch was given to the first place winner, a team of three Brooklyn residents. They built a 15-foot dragon with icicles as fangs and Oreos as claws.

Gabriel Willow, 32, was one of the team members from the winning sculpture. He heard about the competition by being on the mailing list of The High Line and told his housemates: Taj Kottamasu, 30, and Rebbeca Pappas, 31.

After the winners were announced, Willow said he might take snow sculpting more seriously, and develop that talent. The three were surprised to win, “especially because it was so random,” said Pappas, mentioning they just came for fun.

“Rats are all over the city,” said Mica adding that they saw a few rats in the subway the other day and got inspired. The snow rats were positioned around a garbage bin and on top of a table. They were cartoonish looking, yet a bit life like, sniffing their way around the table, and foraging for scraps in the bin.

Debora Fenker, in her late 20s, got the third prize for an Octopus. She was planning to sculpt something "more morbid," but changed her mind after she saw all the kids. She did not disclose what her idea was, but hinted that it involved red food coloring.

“If you do things that are young, you stay young,” Fenker said.