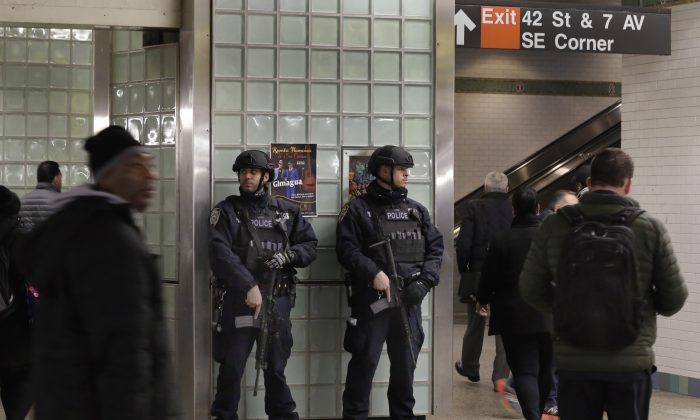 NEW YORK—Authorities stepped up security throughout New York City on March 22 after explosions in the Belgian capital of Brussels killed at least two dozen people in the airport and the subway.

There is no known threat against New York City, but the department deployed hundreds of additional counterterrorism officers to transit hubs around the city “out of an abundance of caution.”

“This was an all-out effort that is part of the normal drumbeat of trying to manage the threat stream in New York City,” said John Miller, the New York Police Department’s deputy commissioner for counterintelligence.

High-profile areas like Times Square will see an increased police presence, and police are monitoring locations relevant to Brussels and Paris, like their embassies.

The explosions in Belgium on Tuesday morning prompted a lockdown of the capital and heightened security across Europe. Belgium raised its terror alert to the highest level, diverting planes and trains.

The Brussels prosecutor’s office called the explosions terror attacks. They came just days after the main suspect in the November attacks in Paris was arrested in Brussels.