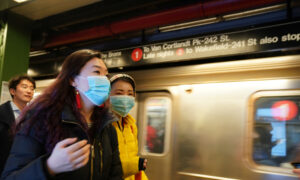 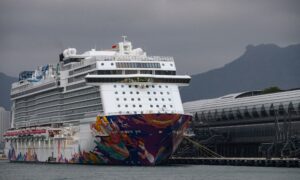 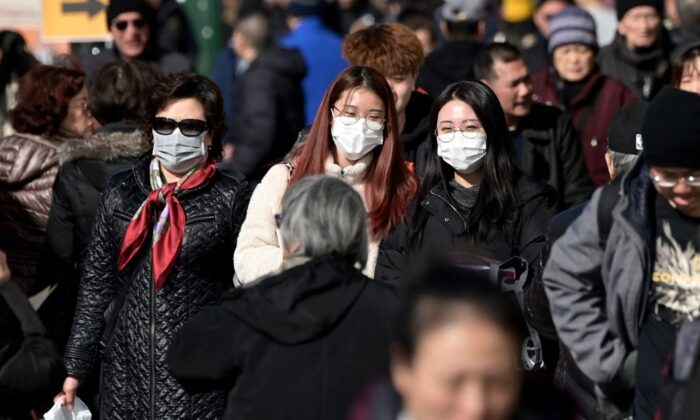 People wear surgical masks in fear of the coronavirus in Flushing, a neighborhood in the New York City borough of Queens on Feb. 3, 2020. (Johannes Eisele/AFP via Getty Images)
America

New York City health officials have said they are testing two new people as suspected cases of coronavirus on Feb. 5, bringing to the total number of suspected cases in the city to four.

The two new patients, both under 40 years old, had recently traveled to China and were suffering from a “fever and cough or shortness of breath without another common cause, like influenza and other cold viruses,” the New York City Department of Health and Mental Hygiene said in a statement.

One patient has been hospitalized while the other is self-isolating at home as the person “did not have symptoms severe enough to require hospitalization.”

The statement did not elaborate where in China the two new patients had traveled to.

“New York City is on high alert and prepared to handle any confirmed cases of the novel coronavirus,” said Mayor Bill de Blasio, according to the statement.

The mayor added: “My message to New Yorkers remains the same: if you have the travel history and are exhibiting symptoms, please see your health provider immediately.”

Before the announcement, the city had already reported three suspected cases of the virus. However, one person was cleared of the virus on Wednesday after their test came back negative.

The city’s Health Commissioner Dr. Oxiris Barbot said it was “fortunate” that the first person tested negative, according to the statement.

“But we expect to see more people presenting to health care facilities with symptoms of the novel coronavirus.”

Currently, there are 12 confirmed cases of coronavirus in the United States: six of them in California, two in Illinois, one in Arizona, one in Massachusetts, one in the state of Washington, and one in Wisconsin.

New York State Health Commissioner Dr. Howard Zucker announced on Feb. 5 that the state does not have any known cases of the virus after the latest test results.

“As of today, samples from 21 New Yorkers have been sent to the Centers for Disease Control and Prevention for testing for the novel coronavirus. Of those, 12 have come back negative,” Zucker said.

New York City will soon able to test coronavirus by itself, according to Mayor Bill de Blasio.

In a tweet on Feb. 5, the mayor wrote the city is “one step closer” to be capable of testing coronavirus samples.

We’re one step closer to being able to test coronavirus samples in New York City. The CDC has given localities the tools, but we still need our labs to be granted the authority. We’re pushing to speed up this process.

“The CDC has given localities the tools, but we still need our labs to be granted the authority. We’re pushing to speed up this process,” the mayor wrote.