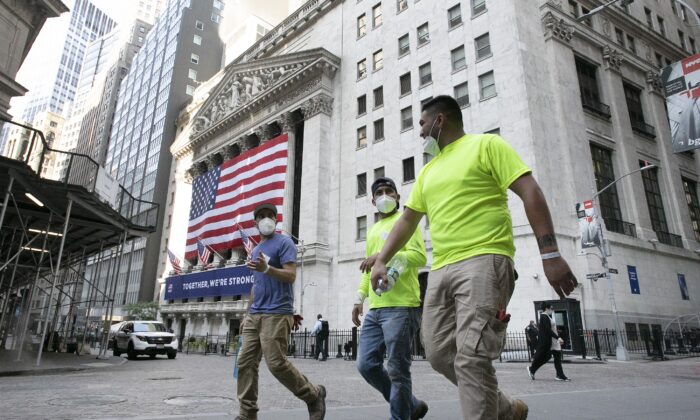 New York City recorded zero deaths linked to COVID-19 on July 11 for the first time since March 14, when the city began reporting deaths from the new disease.

“The numbers are preliminary and they might change within a day or two, but the point is that since the height of this pandemic, the number of deaths have been going down steadily,” she said during an appearance on Fox 5 on July 13.

“We’re now in the single digits, and hopefully this zero will hold, though, again, preliminary.”

The city’s Department of Health and Mental Hygiene notes on its website that recent COVID-19 data is “incomplete” because of delays in reporting.

But New York City Mayor Bill de Blasio, a Democrat, extolled the numbers during a press conference at City Hall.

“This city fought back from being the epicenter of the coronavirus to having a 24-hour period with no deaths at all,” he told reporters.

New York state has the most deaths linked to COVID-19 in the nation. As of July 13, the state reported 32,390 deaths among patients with the disease.

Most of the deaths took place in New York City, which has confirmed 18,708 deaths as of July 13.

At the peak of the crisis, the city saw more than 500 patients die per day with the disease. The worst day was April 7, when 597 patients died, according to data from the city.

De Blasio announced last week that he was ordering the cancellation of all large events through September to try to keep the virus in check. Religious events and protests are exempted from the order.

“While it pains me to call off some of the city’s beloved events, our focus now must be the prioritization of city space for public use and the continuation of social distancing,” the mayor said.

Officials also unveiled a plan for students to return to schools two or three days a week in the fall, though New York Gov. Andrew Cuomo, a Democrat, said the same day that he hasn’t decided which districts can hold in-person classes.