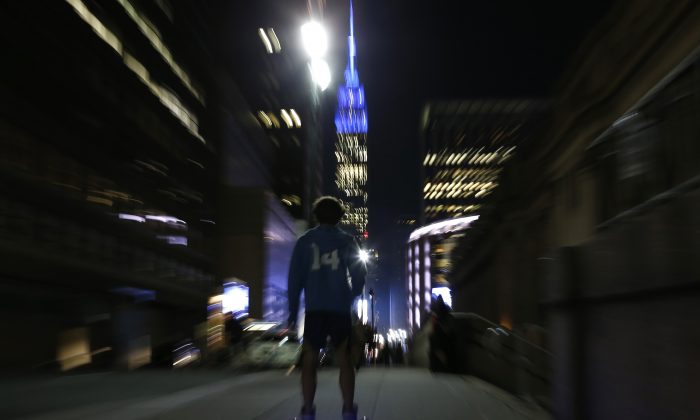 In this Oct. 21, 2015 file photo, a young man rides a hoverboard down a Manhattan street toward the Empire State Building in New York. (AP Photo/Kathy Willens)
New York

Hoverboards have earned an increasingly poor reputation, leading to bans on airlines and city streets.

The latest place the devices have been banned? The New York City public transportation system.

Posters saying “Hoverboards Not Allowed” have begun appearing in subway and rail stations across the city, warning people that there are “no exceptions” to the rule.

“You cannot bring one into the subway, onto a bus nor into rail cars or stations,” it says, according to social media users.

“Hoverboards may be the latest fad, but they are not safe because they have the potential to catch fire.”

The posters come about a month after the MTA, which runs the city’s transportation systems, announced a hoverboard ban.

“The safety of our customers and employees is always our top concern,” said MTA Chief Safety Officer David Mayer in a statement. “For obvious reasons, it is not safe to use hoverboards, skateboards or other personal wheeled vehicles on station platforms. We’re equally concerned about the safety risk of bringing devices that pose fire hazards into the confined spaces inside trains and buses.”

It’s unclear what type of punishment people face for disobeying the ban.

There’s also a general ban of the devices in the city, and disobeying that ban can earn a rider a fine of up to $200.

However, enforcing the ban is not a major concern for police, and actual fines have been rare.

The subway and rail ban comes as Amazon removed all hoverboards from its website on Monday, several days after the U.S. Consumer Product Safety Commission said the self-balancing scooters are unsafe.