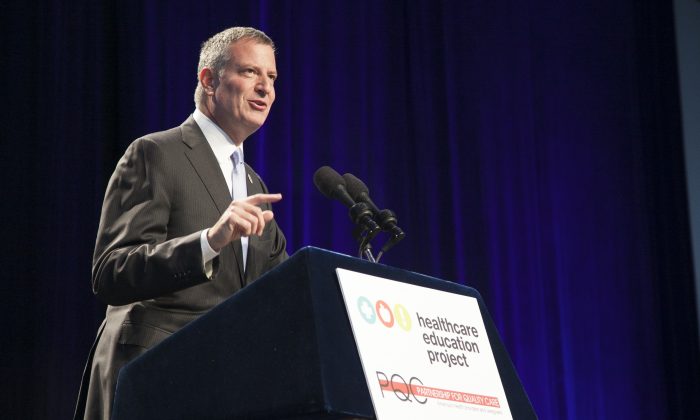 Progressives like to think big. Working out the details is usually someone else’s problem.

New York City Mayor Bill de Blasio recently announced a $150 million initiative to renew troubled schools that is explicitly modeled on Hillary Clinton’s “it takes a village” philosophy. De Blasio envisions schools as community hubs where dental students can check children’s teeth and immigrant parents can learn English. As a particularly “creative” solution to what he apparently sees as a pervasive social problem, one Lower East Side school “got Lowe’s to donate a washer and dryer for parents to use.” The washer and dryer, he said, “helps ensure that even the poorest parents can send their kids to school in clean clothes they’re proud of.”

Details are scarce regarding the implementation of the washer/dryer program, but some obvious questions emerge at once. Who buys the detergent? Where do parents wait while their clothes are in the spin cycle? Is machine use restricted to children’s clothes, or can parents do linens and towels as well? What if there is a line, but someone wants to run separate loads for whites and colors? In sum, how well will one free laundry machine really serve hundreds of families?

A spokesman from the mayor’s office signaled annoyance with these questions, asking, “out of a citywide plan to renew troubled schools, you are really concerned with a washer/dryer unit in one location?” Of course, it wasn’t me who brought the idea up—de Blasio featured it in his speech—but why sweat that detail? When so much of progressive argument consists of scrappy anecdotes or soaring rhetoric, it isn’t cynicism to inquire where all this forward thinking is actually going.

New York City’s progressive legislators frequently address economic and business concerns with what seems like total innumeracy. Progressive advocates and elected officials have recently voiced outrage at the spike in prices at the very top of the real estate market in Manhattan, where ultra-deluxe apartments sell in the high-eight figures. One apartment recently sold for $80 million.

The problem with such transactions, complain the advocates, is that the owners of these expensive apartments aren’t planning to occupy them as residences, but simply use them as investment opportunities to park their capital. These nonresidents—often foreigners—do not pay local income tax and, therefore, “contribute little to the local economy compared to full-time residents,” according to the liberal Fiscal Policy Institute.

A collateral fear regarding Manhattan’s pied-a-terre phenomenon is that some areas in the borough will become hollowed-out, spooky ghost towns. “It wouldn’t surprise some of us,” mused real estate reporter Julie Satow in The New York Times, “to see tumbleweed blow by the Apple cube on Fifth Avenue. As it turns out, this is not just hyperbole.” (With respect to Satow, this is, in fact, hyperbole.)

The area in question, around the Pierre and Sherry-Netherland hotels, has been home to the very rich for at least a century. The neighborhood has scant retail or nightlife, and little public transportation, for a reason: residents want it that way. It is sheer fantasy to imagine that this historically insular neighborhood has been emptied of people because of a newly emergent wealth inequality, when such inequality is what has always defined Fifth Avenue.

In order to dissuade the world’s rich from investing in high-end Manhattan real estate, State Sen. Brad Hoylman (who himself lives on the only slightly more modest southern end of Fifth Avenue near Washington Square) has introduced legislation to impose a special tax on nonresident property owners. Property with a market value in excess of $5 million would be taxed progressively, up to 4 percent of the value annually for property worth more than $25 million.

The bill specifically mentions the area of the Upper East Side that is supposedly desolated by nonresident owners, while noting, “at the same time, low-income New Yorkers continue to face a critical shortage of affordable housing.” This tax, according to progressive Council member Brad Lander, would target “extremely wealthy foreigners.” Council member Corey Johnson, also a member of the council’s Progressive Caucus, plans to introduce a resolution in support of Hoylman’s bill, which, he explains, “touches the folks who are very wealthy.”

The argument about undertaxed absentee investors in Manhattan real estate, however, ignores that the city collects substantial money from these property owners in the form of transactional taxes. Leaving aside state transfer taxes, New York City charges sellers a 1 percent transfer tax on all property sales up to $500,000, and 1.425 percent on sales greater than that. Furthermore, the city levies an additional 1 percent “mansion tax” on buyers of property valued over $1 million, which in much of Manhattan includes every one- or two-bedroom apartment.

Given that foreign investors in Manhattan real estate already tend to “flip” their property more frequently than long-term residential owners—especially in hot markets—the city is already collecting fat revenues in the form of transactional taxes. And if the proposed tax on non-residents suppresses the market, as many industry professionals think likely, then the net effect of the tax will approach zero.

For New York City’s progressives, however, it’s the thought that counts. All sins of logic or arithmetic—whether in the realms of children’s laundry or $50 million luxury apartment sales—are covered by the appeal to reducing inequality.