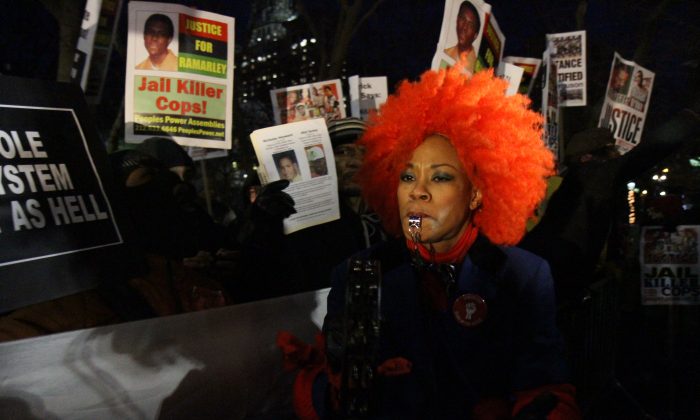 Protesters against police brutality across from a pro-cop rally, not pictured, in front of City Hall, Manhattan, N.Y., on Dec. 19, 2014. (Shannon Liao/Epoch Times)
New York

NEW YORK—Roughly a hundred protesters, from opposing sides of the citywide conversation on whether NYPD policing was too aggressive in the wake of Eric Garner’s death, gathered outside City Hall Friday evening. What had been planned as a pro-cop rally soon became a shouting match between police supporters and those protesting police brutality.

Police barricaded the two opposing groups. At times, protesters from the two sides clashed with each other, shouting obscenities repeatedly and waving signs in each other’s faces when the arguments got heated.

For weeks, there have been outraged protests over the Staten Island grand jury decision not to indict white police officer Daniel Pantaleo for placing Eric Garner, who was black, in a chokehold that led to Garner’s death. Protesters have marched dozens of miles, stopping traffic on highways, bridges, and major street intersections for hours. This week, different community, civil rights, and legal organizations also staged die-in protests throughout the city.

On Friday, protesters demanded that federal prosecutors investigate the death of Ramarley Graham, a black teenager who was shot and killed in 2012 by a police officer while unarmed. In 2013, a grand jury in the Bronx also chose not to indict the officer.

By contrast, the pro-police presence has been minimal. Friday’s #ThankYouNYPD rally is one of the few where supporters of law enforcement have appeared.

“Everybody who showed up here knew that we would be outnumbered,” but showed up anyway to express their support for police, said Peggy Padovano, 58, a legal secretary, from Staten Island.

Garner protesters who heard of the pro-cop rally through social media in previous days were upset. Several walked into the pro-cop section of the barricade and held up their signs.

Many on the pro-cop side of the barricade were retired members of the police force or concerned civilians. They prepared few group chants—”NYPD” and “All Lives Matter” being some of the few exceptions—but had much to say to defend police. Some wore shirts that stated, “I Can Breathe.”

A former patrolman for thirteen years before switching over to the fire department, Bill Rautenstrauch, 51, who also resides in Staten Island, heard of the rally through the newspapers.

He said that police don’t receive as much sympathy as they deserved: “When a police officer does something good, he doesn’t run to the media to tell them. He depends on the person that he did the favor for [to tell others about the good deed].”

Many pro-cop protesters expressed their appreciation for officers’ work and sacrifice.

“I think everybody forgets 9/11 and Hurricane Sandy, and all the times we were in trouble,” said Padovano. “They’re our only line of defense. Our police are the only thing between us and terrorists. I love them.”

Retired second grade detective Christine Leung, 51, who resides in lower Manhattan, said, “We don’t go to work wanting to kill people. Nobody wants to kill someone. That’s a big, big thing [police] have to live with.”

A self-appointed NYPD advocate, Donna Cabell, 53, from the Bronx, said that for a few bad apples, the public shouldn’t “ostracize the entire agency.” Earlier this week, Cabell called police precincts to invite them to the rally. She is not one of the event organizers.

She dressed up in fur and pearls because she wanted to look presentable when “interacting with my officers.”

Mike Stables, 57, traveled from Colorado to join the pro-police rally. He saw a notice about the rally in the New York Post and decided to fly into the city to attend.

“I think it’s important to hear every side. To unify a community, you need to have voices from every side, and input in all forums and fashions,” said Stables.

While Stables isn’t a police officer and doesn’t have any relatives in the police force either, he observed that most of the public conversation about the Eric Garner case was negative toward the police, and pitted the protesters against the police supporters. “It’s important that everyone is recognized and everyone’s voices are heard.”

Dan McSwiggan, 70, a retired fireman, said police officers are in a difficult position when civilians resist arrest. In a widely circulated video showing Eric Garner’s interaction with police officers prior to his death, Garner could be seen refusing to be handcuffed by an officer.

“If you fail to make that arrest, that police officer is now going to be charged by his officers, his supervisor, for failing or neglecting to do his job,” said McSwiggan.

Asked if officer Pantaleo’s chokehold was an excessive use of force, McSwiggan replied, “The man [Garner] was a big man. He refused to be placed under arrest. What do you do now? Let him go? Once you’ve made that commitment, you have to subdue him.”

Some protesters who opposed the NYPD’s policing tactics stood in the pro-police section in an attempt to elicit a conversation with each other. Stan Williams, who is an organizer with the union for government analysts, Organization of Staff Analysts, said Eric Garner’s death is a result of broken windows policing, which often disproportionately affects communities of color.

“It’s a policy question. They [police officers] follow the rules, just like every other city agency,” said Williams. He believes broken windows, a policing strategy championed by NYPD commissioner William Bratton and that targets low-level offenses to deter more serious crimes from happening, should be abolished. “Until we get rid of that policy, nothing’s going to change,” he said.