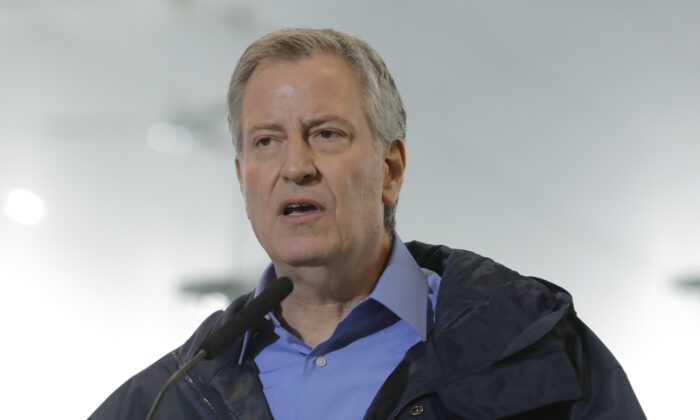 New York City Mayor Bill de Blasio outlined the first phase of the city’s reopening plan, saying that it’s on track to reopen during the first or second week of June.

Speaking in a daily press conference, the mayor said that some 200,000 to 400,000 people will return to work as construction and wholesale operations resume. Furniture and clothing stores can reopen for curbside pickup, the mayor said.

De Blasio noted that businesses that reopen must do so in compliance with social distancing measures that have been established while limiting capacity inside buildings at 50 percent. Those businesses also have to provide employees with protective equipment such as masks.

The mayor said that the city has continued to experience a higher number of patients in hospital intensive care units, though he said that daily hospitalizations and the number of cases being confirmed on a daily basis have gone below key thresholds.

Several days ago, Cuomo announced that the state’s daily death toll dropped below 100 for the first time in two months.

“In my head, I was always looking to get under 100,” Cuomo said on May 23 in a daily briefing, confirming 84 statewide deaths from the CCP (Chinese Communist Party) virus, which originated in mainland China last year.

“It doesn’t do good for any of those 84 families that are feeling the pain,” he said.

According to Johns Hopkins University data, New York has reported more than 28,000 deaths from the virus.