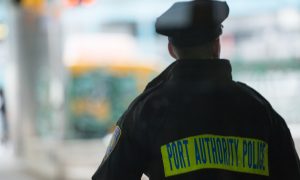 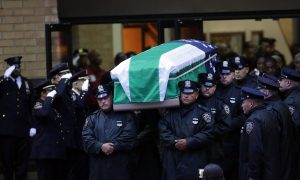 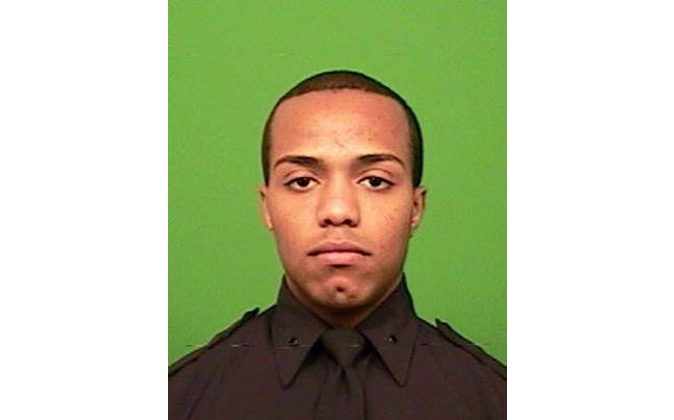 This undated photo provided by the NYPD shows Officer Sherrod Stuart. Authorities say Stuart was shot after exchanging gunfire with a suspect involved in a large fight early Saturday, Jan. 9, 2016. (NYPD via AP)
Crime and Incidents

NEW YORK—A New York City police officer was shot in the ankle early Saturday during an exchange of gunfire with a suspect involved in a large fight, authorities said.

Police Commissioner William Bratton said 25-year-old Officer Sherrod Stuart was wounded on his fourth anniversary with the department. Stuart was hospitalized with injuries that are not considered life-threatening, Bratton said.

A 19-year-old suspect, Christopher Rice, was in serious condition at the same hospital, the commissioner said.

Stuart and other officers were responding to a street fight with guns, bats and knives following a large party in the Bronx at around 2 a.m., according to Bratton.

Stuart was struck in the right foot during an exchange of gunfire with Rice, Bratton said. Stuart returned fire, striking Rice four times, according to Bratton.

Five people from the melee were treated at hospitals for stab wounds, Bratton said, and four guns were recovered from the area.

Bratton said Rice had five prior arrests—including one Friday on a charge of fare beating. He said Rice was released from court at 11 p.m. Friday, just three hours before the shooting.

Bratton, who joined Mayor Bill de Blasio at a news conference at Lincoln Hospital after both men visited the wounded officer, said Stuart is the son of an NYPD detective who is currently on active duty with the U.S. Army.

De Blasio called Stuart “an impressive young man who went into this very dangerous situation and handled himself so well.”

Stuart was shot a day after a Philadelphia police officer was ambushed by a suspect and shot three times.

Philadelphia Officer Jesse Hartnett was in stable condition Saturday. Police said a man confessed to shooting Hartnett and told investigators he had pledged his allegiance to the Islamic State group.