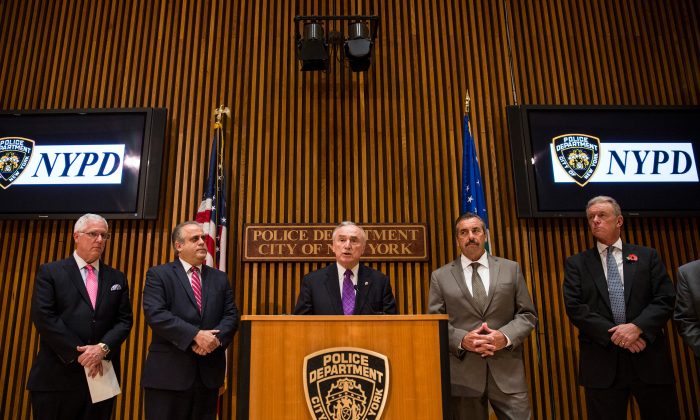 (L-R) John Miller, Deputy Commissioner of Intelligence & Counter-terrorism of the New York City Police Department (NYPD); George Venizelos, Assistant Director-in-Charge of the FBI (Federal Bureau of Investigation); NYPD Commissioner William Bratton; Charles Beck, Chief of the Los Angeles Police Department and Sir Bernard Hogan-Howe, Commissioner of the Metropolitan Police Service of London, at a press conference at the NYPD headquarters in Manhattan, on November 6, 2014. At the annual NYPD-led meeting on anti-terrorism, called Operation Sentry, both commissioners spoke of the growing threat of individuals who self-radicalize and plot attacks after viewing terrorist propaganda on the Internet. (Photo by Andrew Burton/Getty Images)
New York

NEW YORK—As terrorist organizations promote their radicalism on the Internet and inspire young people to commit heinous crimes in their own countries, the city’s police department is stepping up monitoring of social media to identify troubled individuals before they act.

At an annual meeting on Thursday between federal law enforcement agencies and police departments across the country, called Operation Sentry, New York City police commissioner William Bratton and other police chiefs said they discussed how to build relationships with local communities, so that people are encouraged to tip the police about individuals who show signs of dysfunction.

Bratton expressed concern for the sophisticated recruiting efforts of terrorist groups like ISIL that have newly sprouted in the Middle East. “They are rapidly expanding their abilities beyond anything al Qaeda ever dreamed of, in terms of using social media, magazines, and websites to actively and successfully recruit,” Bratton said at a press conference held at the city’s police headquarters.

Two weeks ago, a 32 year-old man, Zale Thompson, attacked a group of police officers in Queens with a hatchet. A police investigation of Thompson’s computer records revealed that he spent weeks prior to the attack viewing terrorist websites. Thompson was shot and killed by police officers, but two officers were injured.

These individuals are known to law enforcement as “lone wolves”—they do not have communications, training, or funding from overseas terrorist groups. Instead, they “self-radicalized” through viewing jihadist propaganda on the Internet.

John Miller, NYPD’s deputy commissioner of intelligence and counter-terrorism, said because these people are usually acting on their own and plotting attacks in their own minds, it is much more difficult for police to detect them.

That’s why establishing trust with communities is so important, Miller said, so that people in the suspicious individual’s social network are willing to come forward and alert police. Then, police can intervene in that person’s life and “take them into different direction,” whether through psychological counseling or family intervention.

In New York City, the police will focus on building relationships with Muslim communities and monitoring websites and social media related to terrorist groups.