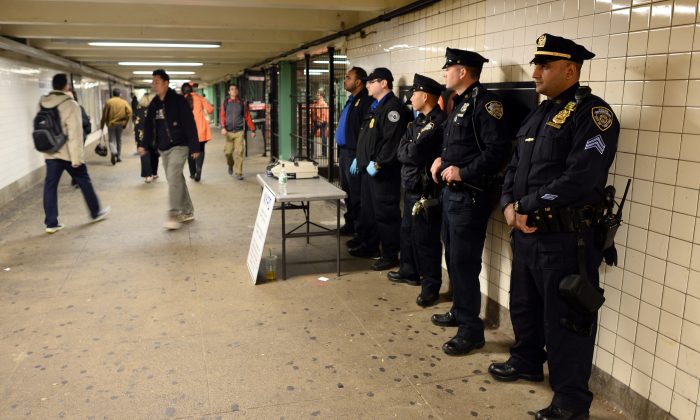 New York Police Department (NYPD) officers man a checkpoint at the entrance of a subway station in Queens, New York, on Oct. 24, 2014, one day after a man charged at four New York police officers with a metal hatchet, hitting two of them. (Jewel Samad/AFP/Getty Images)
New York

NEW YORK—An attack on the city’s subway system, an attack by drones, or a coordinated series of bombings and shootings like the 2008 incident in Mumbai, India: these were some scenarios that the city council considered at a hearing on Wednesday about the city’s preparedness in the event of a terrorist attack.

Representatives from the police department, fire department, and Office of Emergency Management briefed the city’s lawmakers on protocols and training exercises they conducted in case the city is ever targeted by chemical, nuclear, radiological, biological, or explosive weapons.

The NYPD and other city agencies have performed simulation exercises, known as “tabletop exercises,” in the event of an attack during the Super Bowl, the United Nations General Assembly, or the New York City Marathon, said deputy commissioner of intelligence and counter-terrorism, John Miller.

In particular, 400 police officers in the emergency service unit are specially trained to perform rescue missions and react to heavy-duty weapons attacks.

Since the September 11, 2001 attacks, there have been 17 terrorist plots targeting the city. Miller explained that the nature of the attacks has evolved over the years.

In Sept. 2009, a trio received training in Pakistan from high-ranking members of al-Qaeda, in order to carry out a plan to bomb the city’s subway.

Miller said this is much different from the man who attacked four police officers in Queens with a hatchet several weeks ago. The attacker, Zale Thompson, did not receive any training from the terrorist groups themselves but became radicalized after viewing propaganda on terrorist websites.

Groups like ISIL, also known as ISIS, now encourage its followers to carry out attacks in their homeland with whatever weapons are available to them. “He [Thompson] acted precisely in the manner that ISIS was encouraging,” said Miller.

To stem this latest terror threat, the NYPD is closely monitoring terrorist groups’ social media activities and the messages they put out through magazines, newspapers, and videos.

As to the possibility of an attack by drones, the NYPD is still working to develop the appropriate strategies, said Miller. The department’s counter-terrorism bureau recently completed its first “drone-based threat assessment document,” but is still figuring out how to determine whether a drone is a weapon or someone’s camera, how to trace the drone to the owner, and how to disable it if it is a weapon.

The NYPD was also trained to respond to an attack similar to the 2008 Mumbai incident. Miller said that during the Super Bowl exercise, officers were given this scenario: a suspicious package at the stadium turned out to be a false alarm, then a bomb detonated at another location, while a shooter was at-large on the other side of town.