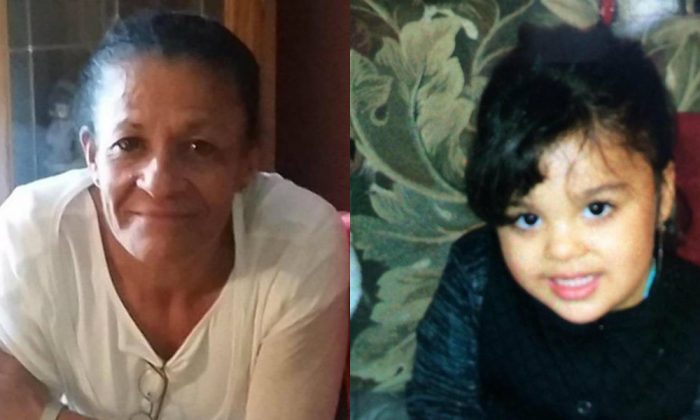 She returned with the child 15 hours later
By Jack Phillips

A New York City nanny is accused of kidnapping a 3-year-old girl who was in her care, police said.

Fatima Alexander, 59, was last seen with three-year-old Gabriella Russo at the child’s lower Manhattan home on Tuesday at around 9:15 a.m., ABC News reported. The two were reported missing by police, the NYPD said.

The NYPD then tweeted a “missing person” poster later that day.

The nanny was supposed to bring the girl to day care when she picked her up on Tuesday. But about 15 hours later, she returned the toddler to the child’s home just after midnight. Police said the pair were in “good condition.”

The nanny was arrested and charged with kidnapping, endangering the welfare of a child, and unlawful imprisonment.

Alexander had worked with the child’s family for more than 10 years. She has no known medical issues, WABC-TV reported.

“She didn’t make it to school,” Rebecca Russo, the aunt of the child, said of the girl on Tuesday night, according to NBC New York. “We last saw her on surveillance cameras.”

When she was asked where she took the child, Alexander replied, “Nowhere.”

“It was about 1 o’clock when I called the school, they said, no, they never got—she never came here,” Marc Russo, the girl’s father, explained to the New York Daily News. “I called twice to make sure it wasn’t a mistake.”

It’s unclear if Alexander has a lawyer.

NYPD Chief of Detectives Robert Boyce told the New York Post: “The nanny has been with the family for three years. A trusted lady. No issues ever before that, so it was a little bit surprising.”

Alexander left her phone at the family’s residence, officials added.

The nanny has no prior arrests, “so it’s a little perplexing for us exactly why she did this. But she just said she wanted to take the child for a walk,” Boyce said.