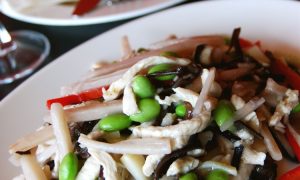 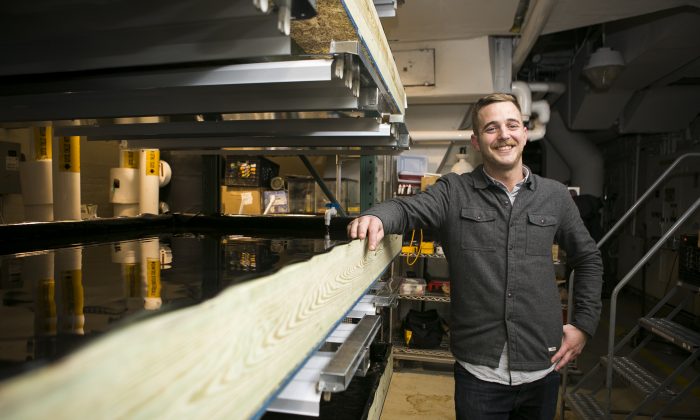 Ryan Morningstar, co-founder of VertiCulture Farms, at the farm in Bedstuy, Brooklyn, on Feb. 23. VertiCulture is a startup that aims to be the first commercial-scale aquaponic farm in New York City. (Samira Bouaou/Epoch Times)
Environment

NEW YORK—In the dusky penthouse of the old Pfizer building in Bedford-Stuyvesant, Brooklyn, four urban aquaponic practitioners meet after sunset. They check the nitrate level, the ammonia level, and then the grow beds, the fish tanks, and the bacteria, to make sure that the delicate balance of their rare farm has not been thrown out of kilter while they were away working at their day jobs.

Miles Crettien, Jacob Hill, Peter Spartos, and Ryan Morningstar are co-founders of VertiCulture Farms, a startup that is operating an aquaponic research and development farm. It has plans to become the first commercial-scale aquaponics farm in New York City.

With backgrounds in agriculture, ecological design, fish, plant biology, and business, the quartet is working on a large aquaponic farm that will soon allow New Yorkers to not only buy Brooklyn-grown fish and vegetables, but also provide the technology and education for people to grow their own fish and veggies from their apartments should they choose.

The success of such a farm could propel an important shift in New York City: Imagine if a city of more than 8 million could mass produce its own food.

It would greatly reduce fossil fuels from food transportation to say the least, and increase food freshness.

“I’m really excited about this project,” said Jennifer Berg, director of New York University’s graduate food studies program who has been following the startup’s progress. “It seems it’s going to be done right, and it can serve as a model for other cities.”

Aquaponics—the antithesis of large-scale industrial farming—is an innovative farming system where the waste stream of fish is used as a source of nutrients to grow vegetables in water.

The fish and vegetables are grown simultaneously in one controlled, recirculating system that excludes hormones, fertilizers, and pesticides.

According to research from environmental think tank Worldwatch Institute, 42 percent of the global consumption of fish is of farmed fish.

VertiCulture doesn’t need hormones and antibiotics because it uses the hearty tilapia. They’re meaty fish, and they naturally grow fast in restricted settings like puddles or aquaponic systems.

A shiny, grayish-pink fish that can survive in a mud puddle for years, tilapias were the primary fish eaten during Biblical times. Ancient Egyptians even had a hieroglyph for this particular fish. In the 21st century, tilapia can help alleviate overfishing.

That makes it all the more important to grow tilapias because, according to a study from Dalhousie University in Nova Scotia, Canada, oceans will be devoid of fish by 2048 if the world continues at the current rate of commercial fishing.

“Aquaponics is not the only answer,” said Berg, the director of NYU’s graduate food studies program. “But it’s one answer that’s going to carve a way toward the solution.”

Tilapias, however, have had a bad reputation after a Wake Forest University School of Medicine found that tilapia contained less omega-3 fatty acids than salmon. Its potential connections to heart disease, arthritis, and asthma were also publicized out of context.

“That’s why we’re trying to make tilapia cool,” said Morningstar, one of the co-founders of VertiCulture Farms. “Tilapia is a very versatile white fish. It can be used in a lot of the same respects as cod, haddock, and all these fish that are overfished.”

Overall, aquaponic farms have taken off slowly globally because the technology is new and the risks are high.

“It’s a very volatile system,” Morningstar said. A spike in the nutrient levels can wipe out a whole harvest of vegetables. If the ammonia level is too high the environment will be toxic for fish.

Yet there has been a growing interest in aquaponics in places from Detroit, to Gaza, to underserved communities in Bangladesh. But few are of this scale or technological ambition.

VertiCulture Farms is designing a lot of its own technology, and hopes to pave a way for the creation of future aquaponic farms that can be maintained easily by people with full-time jobs. The co-founders believe the fact they have been able to keep their day jobs and work remotely proves that the model can be scaled for widespread adoption.

The startup is expecting its first harvest at the end of March, and has plans to expand to a 10,000-square-foot rooftop farm within a year. Then it will begin selling the vegetables and fish it grows directly to retailers in New York City.

“Ultimately when we get to a larger scale, we want a price scheme that works for diverse income communities,” Morningstar said.

When Anna Sporer, a chef instructor at Institute of Culinary Education, tried hydroponically grown tomatoes, she felt that the taste was lacking.

“Soil makes flavor,” she said. “It’s like how people want Havana cigars. It’s the same plant, but every place has a different flavor.”

At Sporer’s restaurant, Ruby’s Hotel in the Hudson Valley, her produce comes directly from the restaurant’s garden. And she said she would not be interested in buying produce from an aquaponic farm.

But she emphasized that produce from aquaponic farms do increase nutritional value and are good for urban areas.

“The minute you pick something it starts to lose nutrients,” she said. “The freshness of the produce [from an aquaponic farm] is great for urban areas that lack access to fresh food.”