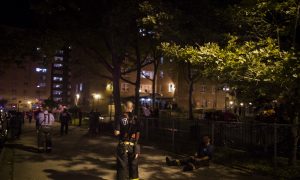 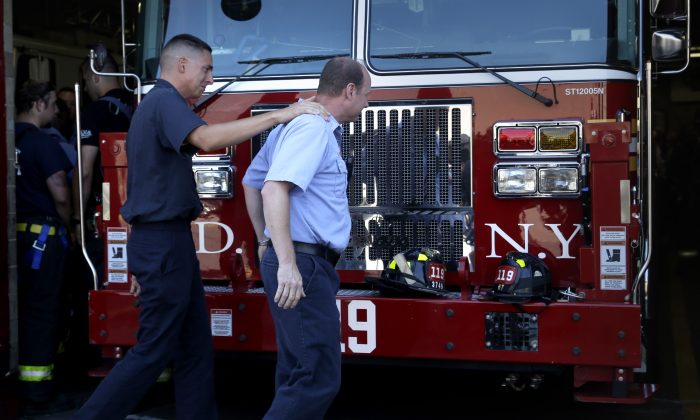 Firefighters comfort one another after bunting was hung in honor of Lt. Gordon Ambelas in New York, Sunday, July 6, 2014. The Fire Department of New York is mourning the death of Ambelas, who became trapped while looking for victims in a public-housing high-rise blaze, the first to die in the line of duty in more than two years. Ambelas died Saturday after suffering multiple injuries while on the 19th floor of the 21-story building in the Williamsburg section of Brooklyn, officials said. (AP Photo/Seth Wenig)
Crime and Incidents

Firefighter Lt. Gordon Ambelas, 40, died in the line of duty Saturday while searching for life in a burning Williamsburg apartment. He’s being remembered as a great man, husband, and father of two.

“Ambelas went into the apartment to search for life and did not come out, and by the time his brother firefighters found him, it was too late for him,” Fire Commissioner Daniel Nigro said.

Fellow firefighters found Ambelas unconscious and carried him out of the building. They worked with emergency rescuers to try to revive him, but he succumbed to his multiple injuries at the Woodhull Medical Center hospital.

His was the Fire Department’s first in-action loss in more than two years.

Ambelas’s wife, Nanette Russo Ambelas, 43, was struck by the news. “My life and my children’s has forever been changed,” she wrote in a Facebook post. “I was lucky enough to call you my husband for almost 10 wonderful years.”

The couple lived on Staten Island and had two young daughters. “[T]hank you for giving me two of the most special part of you,” Ambelas wrote. “Gabriella and Giovanna had the best father in the world.”

Gordon Ambelas, called “Matt” by his friends and family, had been promoted to lieutenant 10 months ago after 14 years of service.

“How do I say goodbye to you Matt you were my everything and the rock of this family. My heart will never heal and I will love you forever,” his wife wrote. “I want more time!!! Sleep with the angels baby and we will be together again until then I will raise our girls to make you proud.”

Ambelas was among the firefighters from Ladder 119 honored for helping to save a 7-year-old boy who became trapped in a roll-down gate in May.

Firefighters solemnly hung bunting at the Hooper Street firehouse where Ambelas had worked for the last several months of his 14-year career.

“He died a hero—that’s how he lived,” firefighter Eric Bischoff said of his longtime colleague, friend, and former roommate, calling Ambelas “truly one of the best human beings that anyone would ever want to meet.”