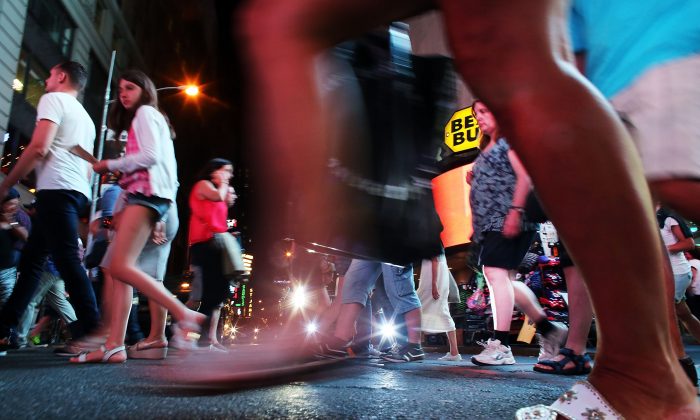 NEW YORK, NY - AUGUST 19: People walk through Times Square on August 19, 2015 in New York City. As the iconic Times Square continues to draw tourists with its entertaining and carnival like atmosphere, New York Mayor Bill de Blasio has announced that the city is preparing to address the issue of topless and painted women who pose for pictures while soliciting tips. In recent years Times Square has seen an influx of performers who dress in a variety of costumes and sometimes become aggressive with the public. The semi-nude women, who call themselves desnudas, Spanish for naked, and pose for photos in exchange for tips, are a new addition to the colourful environment. (Photo by Spencer Platt/Getty Images)
New York

“When life gives you lemons, you make lemonade,” is a common proverbial phrase to encourage optimism and turn a situation around for the better—especially when things get tough.

Epoch Times interviewed New Yorkers about their favorite life mantra, statement, or slogan they live by. Here’s what they had to say:

The Macrae’s mantras are very simple. “Be happy and live a happy life,” Merie told Epoch Times, adding that, “If you’re having a bad day you’ve got to try to rally up the good feeling.” Her daughter, Bonnie, also believes the same as far as being happy goes, but she also stressed “To be determined no matter what and always smile,” is her main mantra. No matter what life throws at you, “Just keep going,” Bonnie said.

2.  Susan Joseph, The Commonwealth of Dominica

Joseph is a Catholic woman, who takes her beliefs everywhere she goes. It is, she says, what keeps her going forward in life. “There’s a song that says, ‘the God of the mountains is a God of the valley.’ He is there all of the time, summer, spring, winter, fall,” she said, adding, “He is the same God. He never changes and never distances Himself from his people. We move, but He never moves, ” Joseph said firmly.

3.  (L-R) Steven Latorre and Earl Bradshaw of the Bronx.

These two Bronx natives have recently turned 27 years old, and have seen some rough times. They told Epoch Times that they grew up in a neighborhood with a lot of gangs. People would sell drugs on street corners in their neighborhood. They said they realized it was not a sustainable lifestyle, and going down that road wasn’t going to get them anywhere. So they both found steady nine-to-five jobs, working hard to take care of their families.

“Life is what you make it,”Bradshaw told Epoch Times. “Whatever you do, make sure you give it your all, one hundred percent, and nothing can go wrong.” He continued, “Even when there’s bad, some good always comes out of it.”

His pal, Latorre, couldn’t have agree more, adding, “I am never out of the fight. I went through a lot of things in life. Negative things happen every day, but what matters is how you look at them. Get back up, keep pressing on. Life is what you make it. Positive vibes create positive manifestations,” he said.

This person chose to remain anonymous, but he told Epoch Times that his life’s mantra is, “You know you did the right thing when you are at peace with yourself,” adding “It’s good to do things that bring you peace.” He is a Concrete Inspector from Orange County, New York. He told Epoch Times he was born in Mexico and came to the U.S. at the age of 12. He said learning the English language was very challenging for him, but what matters is, it is no longer a challenge.

A woman, who also chose to remain anonymous, said her life’s mantra came from a friend of hers. “To defer to persevere,” meaning to never give up, “always continue,” she said.

Although Assaf is visiting from Israel, he said he works in the Big Apple. His mantra, like others, is to be happy, but he did have a little bit of a twist:

“Be happy with whatever you are doing, and whatever that you are doing, do it with a smile, it’s really important,” he told Epoch Times. Also, he said, when you do things with a smile, it makes you feel better, but also makes you do better, too—one of the “most important things” to him in life, he said. When asked what he does when in a situation that angers him, he said, “I take deep breaths.”

“At birth, you are giving a name that serves as an identification, but it’s up to you to create the name that identifies you,” Lewis told Epoch Times. She made up this mantra when she was only 17 years old. Because of social media, she said “Everybody thinks just having a name is more important than the things that actually define you. If you just know my name, but you don’t know what I do, there’s no use in that. You can know what I do or how I present myself without knowing my name, and that’s ten times more important.”

She said people tend to get judge by their names: “If you’re a girl with a boy’s name, or you have a couple of ‘ique’s’ in the end of your name, and not ‘Anna’—I think that it’s super important for us to separate [from] that and truly define ourselves.”

“Eat clean, stay healthy, and be happy,” Brudner said, adding that the mantras are “part of her lifestyle.” When things get rough, she said, she meditates. “Meditation is really good,  it helps balance you,” she said. Brudner meditates a couple of times a week.

Jen’s life mantra, is similar to Brudner: “To be happy, enjoy life, and love people,” she said. She recalls a time when she was younger that she was in a different space when it came to caring about others. “I think once you start to care about people besides yourself, it really opens up a whole new world,” she said.

Dallas and Beth are both 18 and have been roaming the streets of New York for five days before they head back to their hometown. Their life mantra is to be happy, “as cliche as it sounds,” Beth said.

Beth has clinical depression, which she takes medication for, and goes to therapy twice a month.

“I try my best to not give in to what my depression wants. It wants me to lay down on my bed for 23 hours a day, only getting up one hour to eat a piece of cake.” She continued: “So I don’t do that. I came to New York City, and I forced myself to do stuff, and that helps a lot.”

She went on to say that she has a tattoo of her life’s mantra, which reads, “It’s perfectly fine to be a happy individual.” It came from a song called “1985” by a band named Bowling for Soup, she said.

For Dallas, it wasn’t a song, but a documentary, that inspired him. He saw the documentary a few years ago about “a guy who just surfed,” he said, adding, “He lives on an island somewhere. That’s all that he does, that’s his passion.”

Dallas got a tattoo on his left arm of a surfboard, which serves as a reminder the importance of not only being happy, but finding your passion. “[The surfer] has his passion, and I want to find my passion,” Dallas said.

Dallas is going to Fashion Institute of Technology (FIT) in August.