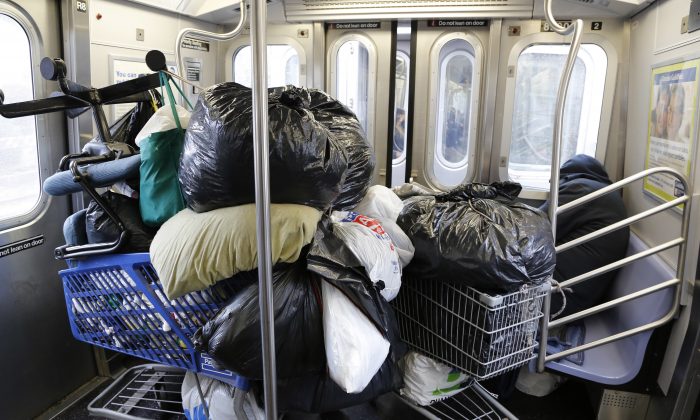 In this March 14, 2016 photo, a homeless man, right, sleeps with his belongings stacked into two shopping carts while riding the subway in New York. (AP Photo/Mark Lennihan)
New York

New York City Is Upgrading Security at Its Homeless Shelters

NEW YORK—New York City will re-establish a domestic violence program in homeless shelters as part of broader efforts to upgrade security at the facilities, where family incidents are the most common form of violence, Mayor Bill de Blasio said March 15.

The New York Police Department will retrain all security staff at the Department of Homeless Services and place a police management team there. A more extensive reporting system will track incidents at shelters.

“I’ve been clear that we are going to own the challenges of homelessness and be transparent about how serious they are and what we are doing to deal with them,” de Blasio said in a statement.

Mary Brosnahan, president and CEO of the Coalition for the Homeless, said advocates “welcome the uniform standards of professionalism NYPD training can bring to front-line security officers in New York City shelters.”

In February, police arrested a fugitive suspected of stabbing his girlfriend and all three of her small children at a hotel used as homeless housing.

“Violence … is undoubtedly the major deterrent preventing our most marginalized neighbors from accessing lifesaving shelter.”
— Mary Brosnahan, President and CEO, Coalition for the Homeless

Rebecca Cutler, 26, and daughters Ziana, 19 months, and Maiyah, 4 months, died in the attack at a Ramada Inn on Staten Island. Two-year-old Miracle was critically injured.

It was the third fatal stabbing at a homeless shelter in several weeks, prompting the New York State Office of Temporary and Disability Assistance to send city officials a letter demanding “immediate action” to protect residents.

As part of the 90-day review, the mayor has already increased security at mental health shelters and at commercial hotels.

Total spending for security at DHS is about $140 million annually, an increase of 35 percent over the previous administration, according to de Blasio’s statement.

“Violence — both physical attacks as well as serious threats of bodily harm — is undoubtedly the major deterrent preventing our most marginalized neighbors from accessing lifesaving shelter,” Brosnahan said.

“Homelessness may be synonymous with despair — but protecting homeless women and children from brutality and providing them the emotional support to heal are the two key essentials to shifting their lives towards hope and prosperity,” she said.