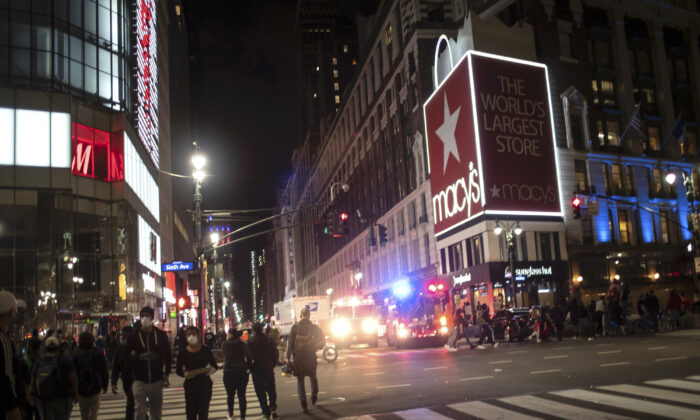 Police vehicles park outside Macy’s flagship Herald Square store in New York city after it was broken into on June 1, 2020. (Wong Maye-E/AP Photo)
US News

NEW YORK—New York City imposed a late-night curfew Monday that failed to prevent another night of destruction, including arrests after a break-in at the iconic Macy’s store on 34th Street, following protests over George Floyd’s death.

As the 11 p.m. deadline to get off the streets approached, bands of protesters marched peacefully through Manhattan and Brooklyn, but police simultaneously responded to numerous reports of roving groups of people smashing their way into shops and emptying them of merchandise.

The doors of Macy’s flagship Manhattan store were breached. Police pulled two handcuffed men out and put them in a van.

Video posted on social media showed some protesters arguing with people breaking windows, urging them to stop, but instances of vandalism and smash-and-grab thefts mounted as the night deepened.

“We worked hard to build up the business, and within a second, someone does this,” said the owner of a ransacked Manhattan smoke shop, who identified himself only by the name Harri. “Really bad.”

New York joined other cities around the country in imposing a curfew after days of unrest. It comes on top of months of restrictions on public gatherings already imposed because of the COVID-19 pandemic.

Enough mayhem happened before the curfew took effect that Mayor Bill de Blasio tweeted that it would move up to 8 p.m. Tuesday. The curfew lifts at 5 a.m.

These protests have power and meaning. But as the night wears on we are seeing groups use them to incite violence and destroy property.

Our first priority is keeping people safe, so I’m extending the curfew to Tuesday. It will begin at 8pm.

De Blasio and Gov. Andrew Cuomo said the outbreaks of violence the previous two evenings—which left stores ransacked and police vehicles burned—gave them no choice to impose a curfew and boost police presence, even as they insisted they stood with the throngs of peaceful demonstrators who have spoken out for several days against police brutality.

“We can’t let violence undermine the message of this moment,” de Blasio said in a statement. He and Cuomo are Democrats.

Big crowds rallied in Times Square and Brooklyn on Monday afternoon and marched through the streets for hours. As in previous days, the demonstrations in daylight were peaceful, with officers mostly keeping their distance from marchers. A nighttime march through Brooklyn was also peaceful, and police let it continue for hours after the 11 a.m. curfew passed.

But midtown Manhattan descended into chaos as night fell. There were dozens of arrests, police said.

De Blasio tweeted at 1 a.m. that there were also “real problems” in the Bronx, which had largely escaped previous nights of unrest unscathed.

Video posted on social media showed multiple piles of rubbish on fire on a debris-strewn street and people smashing into stories.

Another video showed a group of men beating a police officer who was alone and down on the ground, smashing him with pieces of wreckage until he pulled his gun and they ran.

After the curfew took effect, police moved more actively to clear the streets, chasing after and knocking down some people who wouldn’t comply as they streamed toward Times Square.

Monday marked the fourth night in a row of mainly peaceful daytime demonstrations, chaotic nights, hot spots of violence and arrests, with the mayor’s daughter among those arrested over the weekend.

Chiara de Blasio, 25, refused to leave as Manhattan street officers were clearing an area because people were throwing things. She was released with a court summons.

Her father said Monday she told him she’d behaved peacefully and believed she had followed officers’ instructions.

Thousands of people have taken to the streets around the nation to protest against Floyd’s May 25 death. Floyd died after a Minneapolis police officer pressed a knee on his neck.

On Sunday, some New York City police officers knelt with protesters. But officers have also clashed with demonstrators.

Police Commissioner Dermot Shea said the department is investigating officers’ behavior in about six confrontations, including one in which two police vehicles plowed through a group of protesters Saturday in Brooklyn.

During Sunday night’s demonstration, video posted to social media showed a police officer pulling a gun and pointing it at demonstrators on a debris-littered Manhattan street moments after a protester used an object to deliver a crushing blow to another officer’s head a few yards away.

By Brian Mahoney and Jennifer Peltz