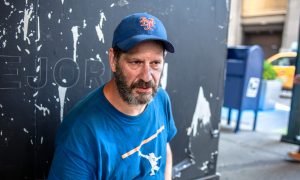 Thousands of Homeless Sleep on NYC Streets, Here's Why They Don't Have To
0
Share Now
TelegramFacebookTweetEmailTellMeWeReddit
Copy Link 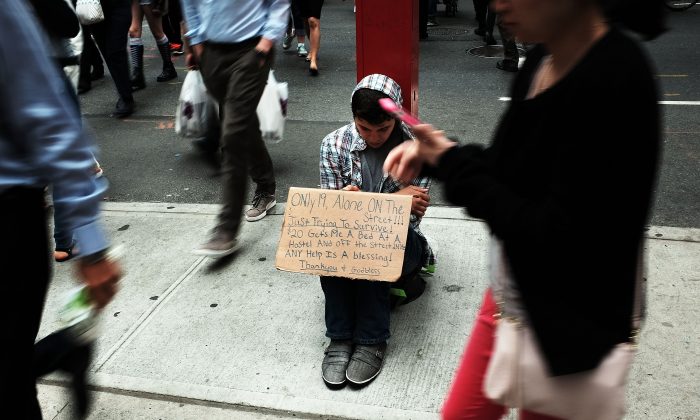 A homeless teen panhandles on a street near Eighth Avenue in Manhattan on May 18, 2015 in New York City. ( Spencer Platt/Getty Images)
Opinion

It is no secret that there is a great rift between the NYPD Sergeant’s Benevolent Association (SBA) and the mayor.

Although the SBA is entitled to its opinion, encouraging members to take photos of the homeless and post them online to insult the mayor’s policies is disheartening, divisive, and dysfunctional.

There are countless acts of respect toward the homeless by the NYPD every day, but this SBA program is certainly not one of them.

This is a shameful menagerie with captions mocking the crestfallen rather than a collaboration designed to solve the homelessness crisis.

This is a shameful menagerie with captions mocking the crestfallen rather than a collaboration designed to solve the homelessness crisis.

The SBA scheme reveals a juvenile maliciousness and demands outrage by NYPD rank and file and all New Yorkers.

The overwhelming majority of NYPD officers reflect qualities emblazoned on every one of their vehicles; courtesy, professionalism, and respect.

As memorialized by my initiatives and published works, I have great appreciation for the NYPD.

But this SBA scheme is diametrically opposed to its sworn noble oath to protect and serve.

Hopefully, there will be an overwhelming response from the NYPD rank and file for the SBA to cease exploiting the homeless as callous political weapons.

On May 2, 2014, I addressed the heart-wrenching reality of homelessness in American society in my Epoch Times column titled “America’s Forgotten Homeless: Awareness, Compassion, Dignity.”

New York City, one of the most affluent societies ever known and home to some of the world’s richest people, paints a sad picture of the homeless crisis.

New York City, one of the most affluent societies ever known and home to some of the world’s richest people, paints a sad picture of the homeless crisis.

Although the city is the epicenter of wealth, education, entertainment, tourism, culture, and diversity, we are failing the homeless.

The homeless are encountered in every famed location of the city; Central Park, Fifth Avenue, Grand Central Terminal, Lincoln Center, Bryant Park, Times Square, and Wall Street and in every borough.

Their suffering must serve as a wake-up call to our conscience and inspire the realignment of our moral compass.

Every human being must avoid the arrogance that ostracizes, belittles, or mocks anyone who is distressed, impoverished, or marginalized.

Every human being must avoid the arrogance that ostracizes, belittles, or mocks anyone who is distressed, impoverished, or marginalized.

America must engrave into its soul that we are only great when there is dignity toward all persons.

According to the “State of the Homeless 2015 Report” of the Coalition for the Homeless, the New York City crisis continues with the number of homeless people sleeping in municipal shelters each night at 60,000. This includes 25,000 children.

The Coalition for the Homeless report also states that during the last city fiscal year, an “all-time-record 116,000 different New Yorkers, including 42,000 different children, slept at least one night in the New York City shelter system.”

Although more research must be done on the correlation between homelessness and mental health, the Substance Abuse and Mental Health Services Administration (SAMHSA) reports that about 30 percent of the people who are chronically homeless have mental health conditions and about 50 percent have co-occurring substance abuse problems.

SAMHSA also reports that over 92 percent of mothers who are homeless have experienced severe physical and/or sexual abuse.

Also, about 50 percent of homeless mothers have experienced a major depression since becoming homeless.

These youth are also more likely to have histories of physical or sexual abuse or experience trauma prior to homelessness.

The SBA has the opportunity to take the ethical high ground once again. This union failed when its leadership motivated a copycat performance by a small group of police officers turning their backs on the mayor at funerals of two its fallen heroes, Officer Raphael Ramos and Officer Wenjian Liu last year.

The overwhelming majority of police attendees, estimated to be over 20,000, honored these great men without turning their backs.

We must have the dignity to turn our backs on no one, especially the homeless. There is always a way to do the right thing even with disagreements between the SBA and the mayor.

The SBA, political leaders, and all members of society must collaborate on the homeless crisis as the destitute deserve compassion, dignity, and respect.

Vincent J. Bove, CPP, is a national speaker and author on issues critical to America. Bove is a recipient of the FBI Director’s Community Leadership Award for combating crime and violence and is a former confidant of the New York Yankees. His newest book is “Listen To Their Cries.” For more information, see VncentBove.com