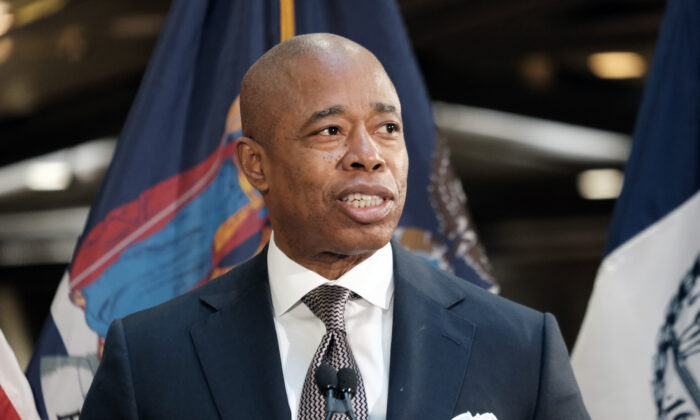 New York handed out free phones over the weekend to hundreds of immigrants, many of whom are in the country illegally, after announcing that the city plans to enroll more than 1,000 immigrant students as Texas continues to bus immigrants to the metropolis.

NYC Health + Hospitals, the city’s hospital system, held an event on Aug. 21 in the borough of The Bronx to give phones, school supplies, food, library cards, and health care to immigrants. At least some of the immigrants who attended the event were bused from Texas to New York, the New York Post reported.

“I came to New York about three days ago. I am a welder, and I am looking for work here,” Adrian Medina, 32, of Venezuela, told the paper.

Other city officials said on Aug. 19 that they estimate that at least 1,000 children of recently arrived asylum seekers—the vast majority of whom are illegal aliens—will be enrolled in the city’s school system when the new school year starts.

The initiative includes providing backpacks and school supplies to students, making sure students have access to teaching in their native languages, preparing the students to learn English, and setting them up with social workers who will assess their “social and emotional needs.”

New York is a so-called sanctuary city. Key features of such cities include not cooperating with federal officials to apprehend illegal immigrants and implementing new programs to assist the immigrants.

“Our city has been, and will always be, a city of immigrants that welcomes newcomers with open arms,” Adams said in a statement. “‘Project Open Arms’ ensures we are well-prepared to assist asylum-seekers as the school year begins and that we are offering wraparound services to students and families.”

Texas Gov. Greg Abbott and Arizona Gov. Doug Ducey ordered state officials earlier this year to offer bus rides to immigrants who had crossed the border illegally and were released by federal officials.

Crossing into the United States between ports of entry is illegal, and immigrants who do so are supposed to be removed from the country. But many illegal immigrants claim asylum, a form of protection granted by the U.S. government if certain criteria are met, and are allowed to live inside the United States while they wait for their claims to be heard. Because of severe backlogs, that can take years.

Many illegal immigrants don’t show up to their court hearings, while others aren’t removed even if their claims are rejected, despite being in violation of federal law. Under the Biden administration, the United States has recorded unprecedented numbers of illegal immigrant arrests at the U.S.–Mexico border. The number of releases has gone up, while the number of deportations has gone down.

Abbott and Ducey, both Republicans, have said that the bus programs are meant to force President Joe Biden and Congress to act to clamp down on illegal immigration. They initially sent the illegal immigrants to Washington, but Texas recently started sending some buses to New York.

More than 7,000 illegal aliens have been transported to Washington, while more than 900 have been sent to New York, Abbott’s office stated on Aug. 19. New York officials at about the same time said approximately 6,000 have arrived since April.