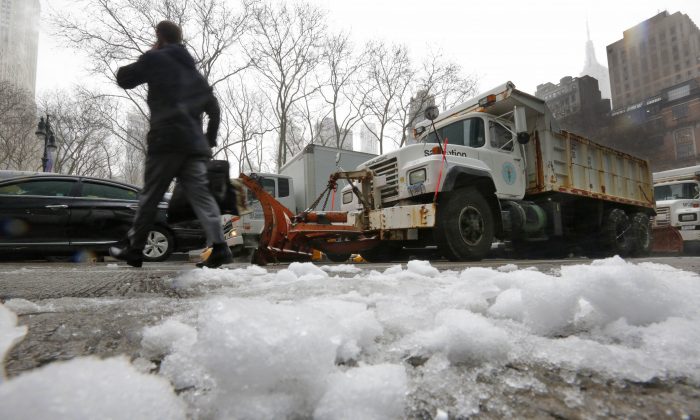 A man crosses Sixth Ave., in front of New York City Sanitation trucks with snow plows attached, near Bryant Park in New York, Monday, Jan. 26, 2015. Officials cautioned Northeast residents to not be misled by a relatively smooth Monday morning commute, and pressed their cautions to prepare for a "crippling and potentially historic" storm that could bury communities from northern New Jersey to southern Maine in up to 2 feet of snow starting later in the day. (AP Photo/Richard Drew)
New York

New York City: Get off Work Early Due to Snow, Subway has Limited Service Monday Night

A state of emergency was declared by New York Gov. Andrew Cuomo on Monday.

Cuomo extended the state of emergency from Sullivan County to New York City. The governor said there will be limited subway service around New York City.

As many as 3 feet of snow is expected to fall in the greater New York City area on Monday night and Tuesday.

Cuomo said he’s considering closing down Metro North and LIRR at around 11 p.m. The NYC subway system will continue to run around 7 p.m., and then limited service will be in effect.

More than 5,000 flights were canceled, schools and businesses planned to close early, and cities mobilized snowplows and salt spreaders, getting ready for a dangerously windy blast that could instantly make up for what has been a largely snow-free winter in the urban Northeast.

Snow was already falling during the morning commute in several cities, including Philadelphia and New York, with Boston up next in the afternoon. Forecasters said the brunt of the storm would hit Monday evening and into Tuesday.

Boston is expected to get 2 to 3 feet, New York 1½ to 2 feet, and Philadelphia a foot or so. The National Weather Service issued a blizzard warning for a 250-mile swath of the region, meaning heavy, blowing snow and potential whiteout conditions.

In Hartford, Connecticut, Frank Kurzatkowski filled several five-gallon buckets of water at his home in case the power went out and his well pump failed.

“I’ve got gas cans filled for my snowblowers,” he said. “I have four-wheel-drive.”

Supermarkets and hardware stores did a brisk trade as light snow fell in New Jersey.

Nicole Coelho, 29, a nanny from Lyndhurst, New Jersey, was preparing to pick up her charges early from school and stocking up on macaroni and cheese, frozen pizzas and milk at a supermarket. She also was ready in case of a power outage.