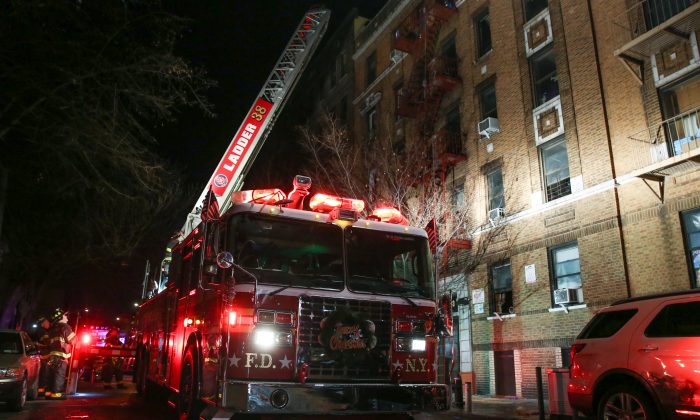 Rep. Nicole Malliotakis (R-N.Y.) said 26 New York City firehouses halted operations on Saturday “due to Mayor de Blasio’s decision to lock unvaccinated firefighters out of work,” though the city’s fire chief said the department had not closed any firehouses and blamed “irresponsible bogus sick leave” by firefighters apparently protesting a COVID-19 vaccine mandate that requires them to get the shot or face unpaid leave.

“As of 7:30 this morning, 26 FDNY stations, including five in my district, have closed due to Mayor de Blasio’s decision to lock unvaccinated firefighters out of work,” Malliotakis said in an Oct. 30 statement, citing information from the Uniformed Firefighters Association.

De Blasio recently announced a sweeping mandate requiring the entire municipal workforce to get vaccinated—with no testing option—by an Oct. 29 deadline, prompting protests by municipal workers and sympathizers opposed to the mandate and sparking concerns about a shortage of first responders.

“The shortage of potentially thousands of firefighters will undoubtedly result in longer response times, leading to an increased potential for injury or death,” Malliotakis said. “Likewise, at a time when crime is skyrocketing, our city simply cannot afford to lose experienced detectives, police officers, and first responders.”

“I urge the Mayor to reverse this mandate immediately before someone is hurt as a result. If not, I fear the consequences will be dire,” she added.

FDNY officials told WABC on Saturday they were aware of an unusual number of firefighters visiting medical offices and calling in sick, with the outlet reporting officials saying that, on Friday, 10 fire companies had temporarily halted operations due to what appeared to be a limited job action.

While FDNY officials did not confirm to WABC whether the figure Malliotakis cited in her statement was accurate, FDNY Commissioner Daniel A. Nigro said in a statement that “the department has not closed any firehouses.”

“Irresponsible bogus sick leave by some of our members is creating a danger for New Yorkers and their fellow firefighters. They need to return to work or risk the consequences of their actions,” Nigro added.

Union leaders denied that the sick leaves were due to job action.

“Is there a sickout? Not to my knowledge, no,” said Andrew Ansbro with the Uniformed Firefighters Association, according to WABC.

De Blasio said at an Oct. 28 press conference, on the eve of the deadline for municipal workers to receive at least one dose of the COVID-19 vaccine or face being sent home without pay starting Nov. 1, that he believed city workers reluctant to get the vaccine would reconsider and, ultimately, decide to get the shot.

Asked by a reporter whether de Blasio was having any second thoughts about the mandate given the likelihood that some police, fire, and sanitation workers would rather quit or go on leave rather than get the shot, the New York mayor replied in the negative.

As of Sunday, the vaccination rate for all FDNY members was 80 percent, including 75 percent for firefighters, 87 percent for EMS, and 90 percent of civilian employees, according to FDNY.

In the face of opposition to de Blasio’s mandate, thousands of firefighters protested at the mayor’s residence on Thursday, raising concerns of walkouts and retirings.

It comes as a recent Kaiser Family Foundation poll found that 37 percent of unvaccinated workers would quit their jobs if their employer required that they either take weekly COVID-19 tests or get vaccinated.