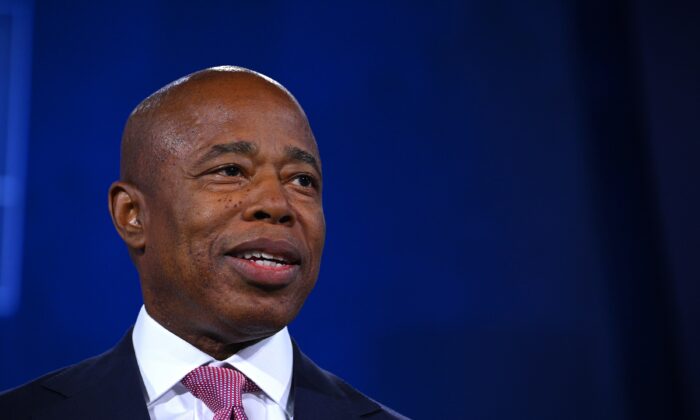 Students who play sports will no longer have to get vaccinated, Mayor Eric Adams, a Democrat, told reporters at City Hall in the borough of Manhattan.

He also said the city will stop requiring private workers to get a vaccine as of Nov. 1.

Adams said the change is “because we’ve been so successful,” citing how 89 percent of New Yorkers have received at least one dose of a vaccine. He also defended the mandates, and announced city workers will still be required to get vaccinated.

“Our vaccinated workforce kept the city open and operating. With over 300,000 employees, it was crucial to put it in place and we’re keeping that in place. Vaccinated workers have carried out their jobs and they stepped up when the city needed them the most,” Adams said.

The city has fired thousands of workers who refused to get a vaccine, including some 2,000 education workers.

There are no plans as of now to rescind the public worker mandate, Adams said.

Asked about the discrepancy between the private and public sector, he said, “I don’t think anything dealing with COVID makes sense, and there’s no logical pathway of one [sic] can do.”

“The determination now from our medical team is to remove the private sector mandates, remove the sports mandates for children, and that is where we are,” he added later. “And if there’s something’s going to change, we’re going to announce it.”

Dr. Ashwin Vasan, the city’s health commissioner, said people should not look at the mandate decisions “in isolation” and that the “major effect” of the mandates was “to push people to get vaccinated.” He did not explain why one mandate would remain in place while the others were rolled back.

The Police Benevolent Association, a union for officers, reacted negatively to the announcement from Adams.

“This announcement is more proof that the vaccine mandate for New York City police officers is arbitrary, capricious, and fundamentally irrational,” Patrick Lynch, president of the group, said in a statement.

“Now that the city has abandoned any pretense of a public health justification for vaccine mandates, we expect it to settle our pending lawsuits and reinstate with back pay our members who unjustly lost their jobs,” he added.

Adams also received a shot of one of the updated boosters on Tuesday, and encouraged all city workers and residents to get one of the new boosters.

He said the booster, which has no human data backing it, “will provide better protection” against COVID-19 than the old booster.