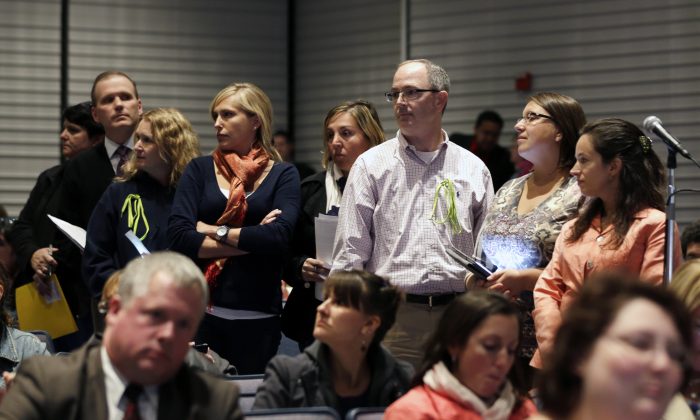 In this Oct. 24, 2013 file photo, people line up to speak at a Common Core learning reforms forum at the Stephen and Harriet Myers Middle School, in Albany, N.Y., on Oct. 24, 2013. Recent data shows many schools continue to struggle with the new tests, which were aligned to the Common Core standards for the second year. (AP Photo/Mike Groll, File)
New York

While officials throughout the state were quick to take credit for slight increases in this year’s standardized school test scores, data shows many schools continue to struggle with the new tests, which were aligned to the Common Core standards for the second year.

The results, released Thursday, showed a less than five percentage point increase in math scores state wide and virtually no change in English. About one third of students were able to score “proficient” on the tests, given to students in grades 3–8.

New York City scores are slightly lower than the state average, though the city was able to narrow the gap in English this year.

Despite officials presenting the results in a positive light, a troubling side remains, especially regarding the stagnation in English Language Arts.

When the results came out last year, teachers and parents believed schools were being set up to fail—citing the limited time to teach the Common Core standards, which introduced new terminology and a specific way of asking questions and solving problems.

Also, David Coleman, the leading creator of the Common Core standards, warned in 2011 it would still take some time for publishers to develop new materials.

“When publishers are telling you they already have great Common Core-aligned materials in mathematics, I hope you have a little skepticism in you,” he said at the Institute for Learning Senior Leadership Meeting.

Yet after another year, with new textbooks and sample questions, New York schools, on average, haven’t improved at all on the English tests.

“[T]hese results should be greeted with kazoos, not trumpets,” said David Bloomfield, education policy professor at CUNY Graduate Center and Brooklyn College. “Politicians like to be associated with good news and so they look at the results with rose colored glasses.”

Data shows that 1,649 schools improved their English scores since last year, but 1,537 did worse and 176 reported the same.

While IS 34 Tottenville on Staten Island boosted its passing rate from 40 to almost 50 percent, Pioneer Academy in Corona, Queens, dropped from over 24 to less than 15 percent.

The scores went up overall in math, but Bloomfield was not convinced, as the slight increase was exactly what the state education department predicted.

“There’s a worrisome predictability to the outcomes based on tests construction,” he said. Based on field-testing the department has an idea of how likely it is for students to answer each individual question correctly, so the tests can be constructed to move the bar up or down.

The data showed one optimistic, if minute, phenomenon. Schools with high poverty rates were able, on average, to improve their English scores more than schools with an affluent population, narrowing the yawning achievement gap between rich and poor students.

Then again, large differences between schools make it hard to discover trends. “We try to impose order and rational explanations on what is likely to be a fairly random sample of outcomes,” Bloomfield said. “It’s impossible to draw conclusions without years-long data.”

Correction: The article was corrected to reflect that David Bloomfield is an education policy professor at CUNY Graduate Center and Brooklyn College.