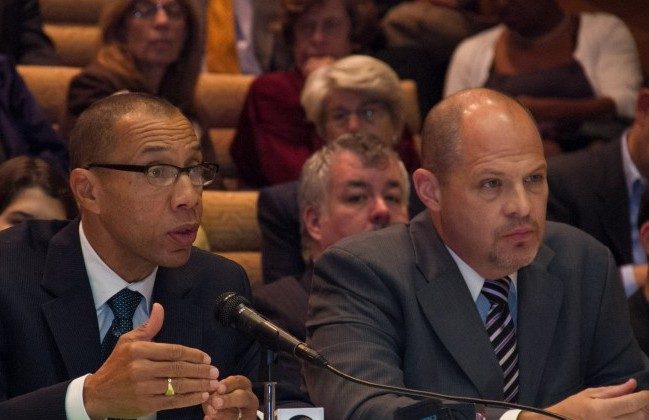 Dennis Walcott (L), chancellor of the city's Department of Education, and Michael Mulgrew, president of the United Federation of Teachers, at a teacher evaluations hearing in New York City on Oct. 16. (Benjamin Chasteen/The Epoch Times)
US

NEW YORK—New York City’s education budget will be $250 million lighter this year after the United Federation of Teachers (UFT) and the city could not reach an agreement over teacher evaluations by the Thursday deadline.

In February 2012, Gov. Andrew Cuomo, UFT, and the city applauded the passage of a revised teacher evaluation deal, however the deal hinged on each district submitting their individual plan.

Despite numerous meetings for nearly a year, including meeting until 3 a.m. Wednesday night, the UFT and the city could not agree.

“This is a sad day for New York City schoolchildren,” Mayor Michael Bloomberg said from City Hall on Thursday.

Bloomberg said after midnight the UFT amended the deal to include a sunset clause, which would cause it to expire in June 2015. He said the move would render the agreement meaningless because teachers are given two years to improve their performance before being let go. “Why would you say you only want to help kids for two years?” the Mayor asked.

The Mayor also said the UFT doubled the number of arbitration hearings last minute, making it harder to weed out ineffective teachers and put an undue burden on principals to attend arbitration hearings. “As it is now, we don’t have time to do it,” Bloomberg said.

Schools Chancellor Dennis Walcott, who is also dealing with a school bus strike this week, said the deal was very close to getting done, but broke down with the late additions to the deal. “Money was not my key motivator,” Walcott said. He said having the right deal in place that would benefit kids was his first priority.

Michael Mulgrew, UFT president, released a statement saying, “Thousands of parents have gotten a lesson this week, as the mayor’s ‘my way or the highway’ approach has left thousands of schoolchildren stranded at curbs across the city by the school bus strike. That same stubborn attitude on the mayor’s part now means that our schools will suffer a loss of millions of dollars in state aid.”

Mayor Bloomberg said the no-deal with have a significant impact on the budget, but he did not think there would be layoffs. He said the city put the $250 million in their budget proposal for fiscal year 2014, and that will need to be revised, although a contingency plan had been discussed.

Gov. Cuomo said an extension would not be given. “The remaining districts and their unions have until midnight tonight to do the same or they will forfeit the increase in education aid they have been counting on and both parties will have failed the children they serve,” Cuomo said.