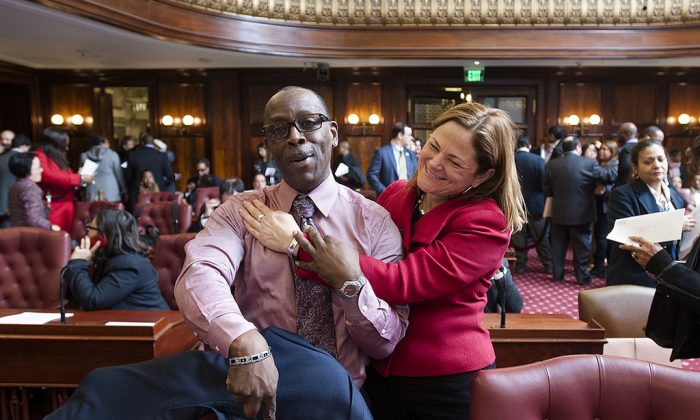 As President of Amalgamated Transportation Union (ATU), I. Daneek Miller worked on creating a women’s committee, a veterans association, the South Asian Labor Coalition, and other new member advocacy groups within the union.

Miller says that since many people of color are employed by the MTA, many municipal workers were focused on improving the conditions for the workers, and the unions. “This is the last beacon that we have right here in New York City,” he said about the working people in the district. He also worked on reestablishing 8 of the 11 bus routes that were slated for closure, from Whitestone to the Rockaways.

Early on, Miller will be dealing with two unique issues. His constituents suffer from the longest commute into Manhattan, with the oldest bus depot in the entire city. Because a good transportation grid is as important for commuters as it is for businesses, the issue of bus routes comes to the forefront.

“If you’re going to attract the economic development that we need to, you have to have transportation,” he said. Another big problem in the district is flooding. Miller will be working on infrastructure resources available for people to deal with flooding. He will also work on issues like co-location of too many children in one school, providing more funding for schools, and get people involved in voting on the participatory budget to have enough funds allocated for school expansion. Also with an increase in crime, he wants to create opportunities for youth to feel valued by the community and have job training and education.

Community groups are talking about the snow removal trucks and picking up garbage, since when the trucks are busy with the snow, they don’t pick up the garbage as regularly. Most of the issues, however, revolve around access to transportation.

His sword in the coat of arms is the truth. You do the best you can and you tell people the truth, that way you gain respect and trust and allies. It’s all about community all about engaging people in community and creating partnerships.

Epoch Times is interviewing members of the 2014 New York City Council to find out what their biggest achievements were last year and what they hope to accomplish in this one. For a list of all council member articles in this project, click here.