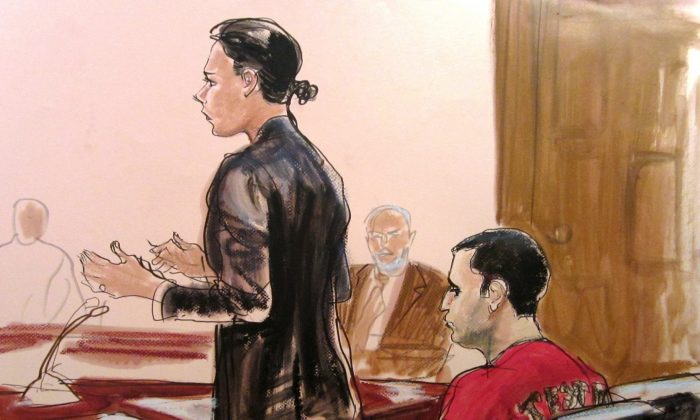 NEW YORK—A former New York Police Department officer was set to leave jail on Tuesday after a judge overturned his conviction in a bizarre case accusing him of plotting to kidnap, kill and eat young women.

Judge Paul Gardephe ruled late Monday that there was insufficient evidence to support a jury’s guilty verdict in the kidnapping conspiracy conviction of Gilberto Valle. His lawyers had argued that the alleged plots were really fantasy online role play that never put anyone in harm’s way.

Valle — dubbed by the tabloids as the “Cannibal Cop” — smiled at his family and hugged his lawyers in court on Tuesday. The judge set bail at $100,000 and ordered home detention for the defendant after prosecutors told him they intended to appeal his ruling.

Valle was convicted in March 2013 on the conspiracy charge — which carries a possible life term — and a misdemeanor count of illegally accessing a law enforcement database. He was expected to be released from jail later Tuesday and stay on home detention until he’s sentenced.

Valle, 40, “is guilty of nothing more than very unconventional thoughts,” one of his attorneys, Julia Gatto, said outside court. “We don’t put people in jail for their thoughts. We are not the thought police.”

A jury had concluded he wasn’t just fantasizing when he conversed online with others he had never met about killing and cooking his wife and others in a cannibalism plot.

In his 118-page opinion, Gardephe said: “The evidentiary record is such that it is more likely than not the case that all of Valle’s Internet communications about kidnapping are fantasy role-play.”

Prosecutors had argued that Valle took steps to carry out his plot, including looking up potential targets on a restricted law enforcement database; searching the Internet for how to knock someone out with chloroform and where to get torture devices and other tools.

In one of the numerous online conversations shown to the jury during the trial, Valle told a man he met in a fetish chat room, “I want her to experience being cooked alive. She’ll be trussed up like a turkey. … She’ll be terrified, screaming and crying.”

In another exchange, Valle suggested a woman he knew would be easy prey because she lived alone. The men discussed cooking her, basted in olive oil, over an open fire and using her severed head as a centerpiece for a sit-down meal.

Valle was fired after his conviction.