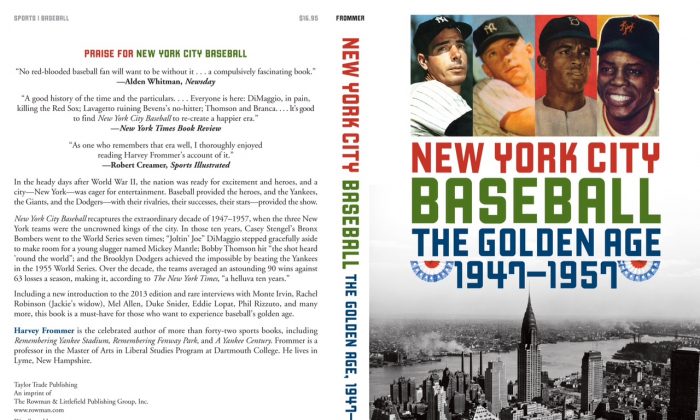 Baseball in October in New York City seemed like it would never come to an end. That is why this October of 2013 it seems strange that the New York Yankees and the New York Mets are finished with baseball, not able to make the play-offs. And the old cry of the old Brooklyn Dodger fan “Wait ‘til next year” seems appropriate.

Also appropriate for me is the re-issue of my New York City Baseball 1947– 1957. Published In 1980, my seventh book at the time, remains one of my favorites.

It was written on a clunky IBM typewriter and the interviews were conducted with a big box cassette tape recorder. I transcribed the interviews by hand, slowly, painstakingly, with great respect for the memories and insights of so many people who were kind enough to pause, to think, to evoke, to bring back the time.

It was a time when there were three teams, the Brooklyn Dodgers, the New York Giants and the New York Yankees. Each team was distinct. Each team boasted a fabled history. Each one had loyal and highly knowledgeable fans rooting for them. Except for 1948, each of the years from 1947 to 1957, a baseball team, sometimes two, from New York City was playing in the World Series.

One of those I interviewed for the book was owner Walter O’Malley in his box at Dodger Stadium in Los Angeles. He seemed so much less villainous than he had been painted.

“If they had only given me the downtown Brooklyn location I wanted near the Long Island Railroad, I would have stayed,” he said. If only he could have known all these years later about the Brooklyn Nets playing in the billion dollar Barclay Center close by where he would have built a new home for the Dodgers.

I interviewed Rachel Robinson, widow of Jackie Robinson. She was gracious, generous in giving of her time and memories as was personable Monte Irvin who had the talent to be “the first” black major leaguer but it was not to be and he explained why. “I would have taken a bat and probably killed somebody. I could have not held back from that abuse.”

One of the great voices in this book (who later appeared in several other books I wrote) is that of the irrepressible Irving Rudd, a real New York City character who for a time was the public relations chief of the Dodgers. He told the tale of famed General Douglas MacArthur coming to Ebbets Field, of Branch Rickey planning the breaking of the color line no matter the personal cost, of talented players and fanatical fans, of special promo events, providing an over-the top enrichment to this work and incredible historical documentation.

In New York City Baseball Mel Allen and Red Barber in their southern voices provide perspective, explaining the art and craft of baseball.

One more time we hear about the “Subway Series,” “Wait ‘til Next Year,” “Dat Day” and “the Shot Heard ‘Round the “World.”

Phil Rizzuto, Hank Bauer, Eddie Lopat and Jerry Coleman, who gave me the idea for the book, and others talk Yankees with pride and detail and even wonder.

I did not know it then but I was working as the oral historian I would become, disguised even to myself.

And the great strength of New York City Baseball and many of the other books I have created rests on the oral history, the multitude of voices and memories I was able to reach and record.

The Duke, the Yankee Clipper, Oisk and Campy, Preacher, Westy, the Barber and Mandrake the Magician, Blacky and Whitey, Skoonj, Pee Wee and Newk, Yogi, Ellie, Old Reliable, the Peepul’s Cherce, the Old Redhead and Old Reliable and the Ole Perfessor, the Chairman of the Board, Scooter, the Mick, Ellie, Slick and Yogi, the Rifle, the Voice of the Yankees, Dem Bums … are all in these pages – talking and talked about.

That is why it so rewarding for me that that this book of mine has another new life. It deals with a special time in the history of New York City. It was a time when you could walk down the street and the sound of baseball in spring, summer and fall was always on, always alluring, always special. It was a time when one could go to a butcher shop, a candy store, a laundromat, moving from one to another virtually without missing a pitch, the sound of New York City Baseball was always on.