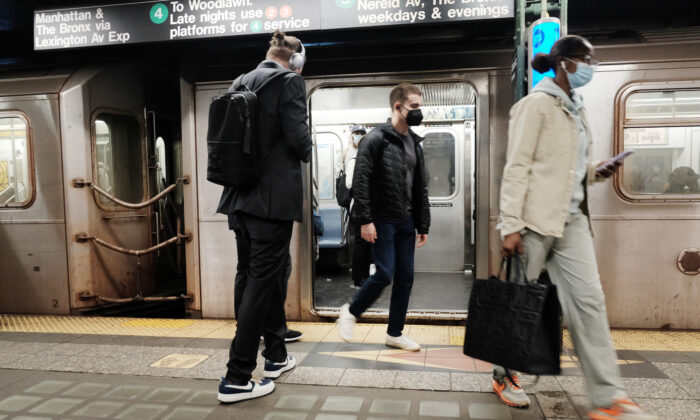 Some transit authorities in New York and California are continuing to require masks even after a federal judge struck down the nationwide mandate for mass transportation systems.

People must continue wearing masks while riding subways or in airports in New York, agencies confirmed to The Epoch Times.

The mandates stem from New York Health Commissioner Mary Bassett’s determination on March 2 that forcing people to wear masks indoors would “protect against the transmission of the COVID-19 virus, including its variants.”

In accordance with that determination, “the mask requirement on public transit in NY remains in effect for now,” Tim Minton, a spokesman for the Metropolitan Transportation Authority (MTA), told The Epoch Times in an emailed statement.

Masks are no longer required in New Jersey, per an order from Gov. Phil Murphy, a Democrat.

The MTA manages buses, subways, and trains in New York City and nearby areas while Port Authority runs PATH, airports, and bus terminals. Millions of people ride on the systems each day.

The Los Angeles Department of Transportation, meanwhile, rescinded its mask mandate after receiving guidance from the Federal Transit Administration, a spokesperson confirmed to The Epoch Times.

The San Francisco Municipal Transportation Agency is still requiring masks for now, pending guidance from the administration, a spokesperson said.

That order, which was repeatedly extended, was struck down by U.S. District Judge Kathryn Kimball Mizelle, a Trump appointee, on Monday.

Mizelle found that the CDC violated federal law by not giving notice before imposing the order and that the order was outside the authority granted to the agency by Congress.

Many other companies and transit systems quickly dropped their mandates, including United Airlines, Uber, and Amtrak, following the ruling.

President Joe Biden’s administration has not yet decided whether to appeal the decision, but has described it as “disappointing.”