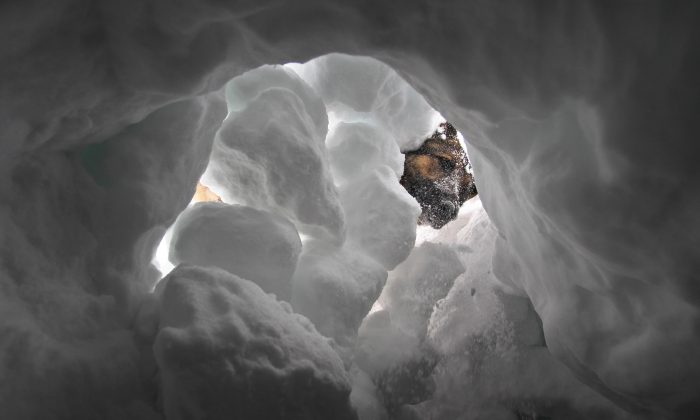 Avalanche dog Aico searches for a person buried by snow during a training on Jan. 17, 2013, near the Alpspitze Mountain in Garmisch-Partenkirchen, southern Germany. (Karl-Josef Hildenbrand/AFP/Getty Images)
New York

GREENWICH, N.Y.—Police say a 13-year-old New York boy who was playing in a snow mound with a friend has died after they were buried in snow dumped by a public works crew.

Greenwich-Cambridge Police Chief George Bell says the boys were playing in a large snow mound created by the Department of Public Works crews clearing streets Tuesday. Bell says the boys had burrowed into the back of the mound when a truck dumped more snow, burying both boys.

Bell says a K-9 found one boy’s sled after they were reported missing around 5 p.m.

A moment of silence was held at Greenwich Central School today for Joshua Demarest. Tomorrow, students will wear… https://t.co/mfZRV62czi

Workers and police frantically used shovels and their hands to free the boys. Joshua Demarest was unresponsive. He was rushed to Saratoga Hospital, where he was pronounced dead shortly after 10 p.m.

The second boy, 12, was found about an hour later. He was recovering at home.