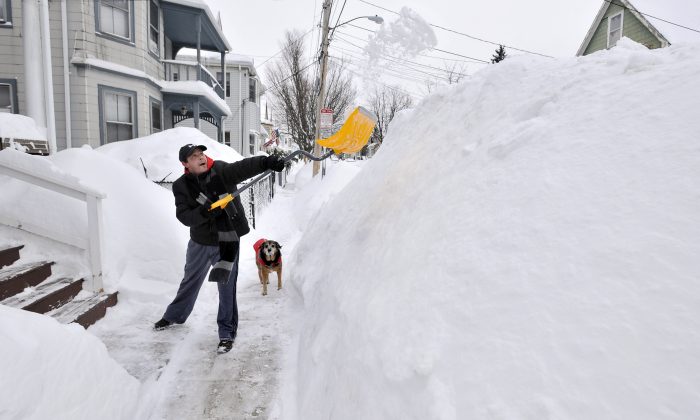 Lee Anderson adds to the pile of snow beside the sidewalk in front of his house in Somerville, Mass., Tuesday, Feb. 10, 2015, as his dog Ace looks on. The latest snowstorm left the Boston area with another two feet of snow and forced the MBTA to suspend all rail service for the day. (AP Photo/Josh Reynolds)
US

New York City got a taste of snow on Saturday, but there’s not going to be any blizzard-like conditions for the city.

The city is slated to get between 1-3 inches, according to Accuweather.com.

Snow beginning within the region, visibility below a mile, slippery conditions especially on any untreated roads. See http://t.co/NDBs1mDXRm

“Major cities in the path of the burst of snow that can cross hundreds of miles include Cleveland, Buffalo, Pittsburgh, Philadelphia, Baltimore, New York City, Washington, D.C., and Richmond, Virginia,” the site says.

It’s expected to last until Sunday. Boston will probably be the hardest-hit major city.

It adds: “The snowfall accumulation will ramp up from west to east across New York state and New England with only the northernmost areas, western Long Island and the New York City metro area being spared heavy snowfall amounts.”

“In the Northeast, blizzard warnings have been issued for all of eastern Massachusetts, including Boston, Cape Cod and Nantucket, as well as the New Hampshire Seacoast, much of southern and central Maine, including Portland, Augusta and Bangor, southern Rhode Island, parts of southern Connecticut, as well as central and eastern Long Island,” says the Weather Channel.

For NYC and Philadelphia, it adds, they’re “under winter weather advisories for a combination of light to moderate snow and strong winds, which could lead to near blizzard conditions in those areas despite much lighter snowfall than New England.”

Wind gusts could howl at 70 mph and north-facing coastal areas could suffer moderate flooding and beach erosion from the “monster storm,” said Bill Simpson, a meteorologist at the National Weather Service in Taunton, Massachusetts.

“Snow amounts will not be as much as the previous big storms, but still, when you have 8 to 14 inches of snow, wind driven-snow, the cold air and the snow that is already there it’s probably going to be very difficult for a lot of people,” he said.

The Massachusetts Bay Transportation Authority announced late Friday it would suspend all rail, bus and ferry service in the Boston area on Sunday, the latest in a series of disruptions for the nation’s oldest public transit network.

Gov. Charlie Baker urged motorists to stay off roads during the storm, but stopped short of an outright travel ban.

The Coast Guard had an airplane flying in the Gulf of Maine Friday broadcasting a warning to mariners about the impending storm, said Lt. Scott McCann.