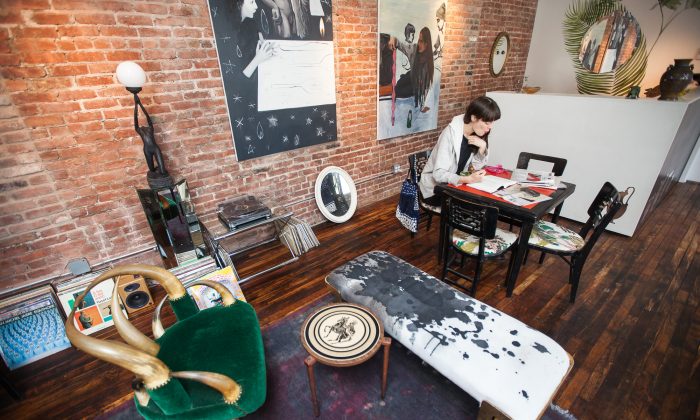 NEW YORK—For many creative minds, the dream of a quiet place of one’s own is nothing more than a dream. In Long Island City, though, the hushed world of The Oracle Club has made it possible.

Opened in December 2011, the members-only club is a world of quiet corners to write, think, and have a cell phone-free lunch. And coffee and tea are on the house.

“I really like the space,” said Kira Joseffson, a writer and translator who joined the club two weeks ago. “It’s nice that it’s a little more open than an office.”

Joseffson, who is currently translating a book from Swedish to English about a sociological study of trends in fashion, lives in East Williamsburg. She comes in a few times a week, if for nothing more than to work around other people. On a quiet Tuesday afternoon this week, Joseffson was one of about five people who were in the club’s two large rooms and studio space on the lower floor.

“I just recently started freelancing, and working from home is not good,” she said.

The club is the brainchild of Julian Tepper and Jenna Gribbon, a boyfriend-girlfriend novelist-painter duo (respectively), who live upstairs. When their building’s first floor was rezoned for commercial space in 2011, they dreamed of what the space could become.

Though the focus was always on a space for members, they went through a few iterations of what would become the final vision.

There was the idea to sell coffee, but that fizzled when Tepper caught wind of the red tape that’d be involved.

As a space for artists, they also imagined hosting drawing classes based on live nude models. But it became clear after going before the local community board that the simpler the concept, the better.

“It’s an old Italian neighborhood, so there was a woman on the community board questioning why we would have naked people there,” said Tepper. “I thought, ‘Am I still in New York?’ It was like I was in the movie Footloose.”

In the end, they came up with a club for artists and writers. Everyone gets their own key and comes and goes as they like between 7 a.m. and 11 p.m. daily. Writer-members pay $150 a month, and studio space (which has a wait list) is $500 a month.

“The place sort of runs itself,” said Tepper, and added that they are still figuring out what the place is. “Everyone is in there, making things and thinking about what they’re working on.”

The club also has a plush lounge with a shiny black upright piano, a comfortable stuffed green couch, and massive potted palms. Oil paintings adorn the walls and a kitchenette provides a spot for free coffee and tea. On the ground floor, a loft reveals artist studios, where you can peek below and see artists at work.

That’s where Karyn Lyons, a painter, was busy inspecting a still life work in progress Tuesday. Lyons, who lives in Manhattan, said one of her favorite aspects of The Oracle Club is that she can interact with other artists and engage with them about ideas. That’s impossible for her at home.

“When I’m here I’m completely focused on painting,” said Lyons. There are other sweet surprises that feed her artist’s soul, too.

“The other day a pianist started playing and it was … it just made me instantly start to cry, it was so beautiful,” she said.

Moments like that add to the atmosphere and intangible sense of place, even for visitors. A friend of Lyons’s who is a Dallas transplant to New York City, had only one thing to say when she visited the club: “This is New York the way you imagine.”