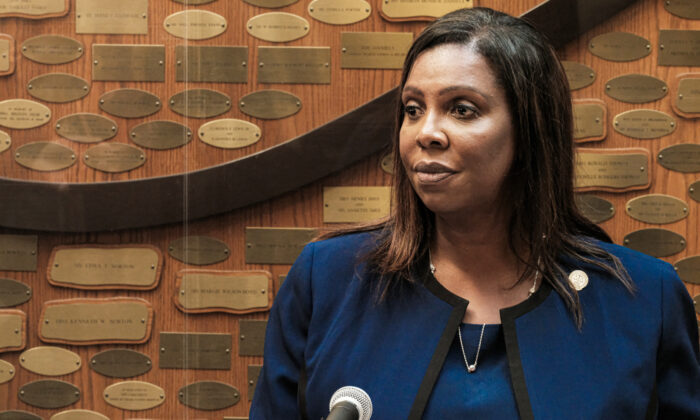 The office of New York Attorney General Letitia James said on Feb. 28 that she rejected a proposal from New York Gov. Andrew Cuomo that she and the chief judge of the state’s Court of Appeals would appoint an independent investigator to review the sexual harassment claims against the governor.

“To clarify, I do not accept the governor’s proposal,” James said in a statement. “The state’s Executive Law clearly gives my office the authority to investigate this matter once the governor provides a referral.”

Cuomo’s office released a statement earlier on Feb. 28 asking James and Janet DiFiore, chief judge of New York’s Court of Appeals, to jointly appoint an independent lawyer to investigate the harassment allegations from Lindsey Boylan, the former deputy secretary for economic development and special adviser to Cuomo, and Charlotte Bennett, another former aide to the governor.

James and DiFiore should jointly select “an independent and qualified lawyer in private practice without political affiliation to conduct a thorough review of the matter and issue a public report,” said Beth Garvey, special counsel to the governor.

That public report would be exclusively controlled by the attorney conducting the review, Garvey said.

James on Feb. 28 called on Cuomo, a third-term Democrat, to issue an executive order putting her exclusively in charge of the probe, saying it would empower her to issue subpoenas, enforceable in court.

“While I have deep respect for Chief Judge DiFiore, I am the duly elected attorney general and it is my responsibility to carry out this task, per Executive Law,” James said in a statement. “The governor must provide this referral so an independent investigation with subpoena power can be conducted.”

Boylan, a Democrat running for Manhattan borough president, in a post published on the website Medium last week, accused Cuomo of making inappropriate remarks, and allegedly touching and kissing her without consent. She said he would go out of his way to “touch me on my lower back, arms, and legs,” compare her to one of his rumored former girlfriends, and once suggested that they should “play strip poker” on a flight from an event in October 2017.

“I understood that the governor wanted to sleep with me, and felt horribly uncomfortable and scared,” Bennett told The New York Times. “And was wondering how I was going to get out of it and assumed it was the end of my job.”

Cuomo’s office has denied the allegations from both Boylan and Bennett. However, the Democratic governor released a statement on Feb. 28 acknowledging that some of his interactions with women “may have been insensitive or too personal.”

The statement maintained that Cuomo has “never inappropriately touched anybody” and said the office would cooperate with an investigation.

“I now understand that my interactions may have been insensitive or too personal and that some of my comments, given my position, made others feel in ways I never intended. I acknowledge some of the things I have said have been misinterpreted as an unwanted flirtation. To the extent anyone felt that way, I am truly sorry about that,” Cuomo said.

We expect to receive a referral with subpoena power to investigate allegations of sexual harassment against the governor, in line with our demands and New York state law.

The referral would be made solely to the attorney general’s office.

James said on Twitter that her office expects “to receive a referral with subpoena power to investigate allegations of sexual harassment against the governor, in line with our demands and New York state law. The referral would be made solely to the attorney general’s office.”

“This is not a responsibility we take lightly,” James added. “We will hire a law firm, deputize them as attorneys of our office, and oversee a rigorous and independent investigation.”

The White House has called on Cuomo to face an “independent review” over the sexual harassment allegations. White House press secretary Jen Psaki described the allegations as “serious.”

“It was hard to read that story, as a woman,” Psaki said during an appearance on CNN’s “State of the Union.”

Bennett’s account of “Cuomo’s sickening workplace sexual harassment and grooming” is “so horrific it makes your skin crawl,” she said in a statement.

U.S. House Judiciary Committee Chairman Jerry Nadler (D-N.Y.) called on Cuomo to refer the probe to James, as is tradition in the state.

“As has become standard practice in the State of New York when allegations relate directly to the Executive, Governor Cuomo should refer the matter to the Attorney General, who should, in turn, appoint an independent investigator,” Nadler said Feb. 27.

Cuomo’s office didn’t immediately respond to a request by The Epoch Times for comment.