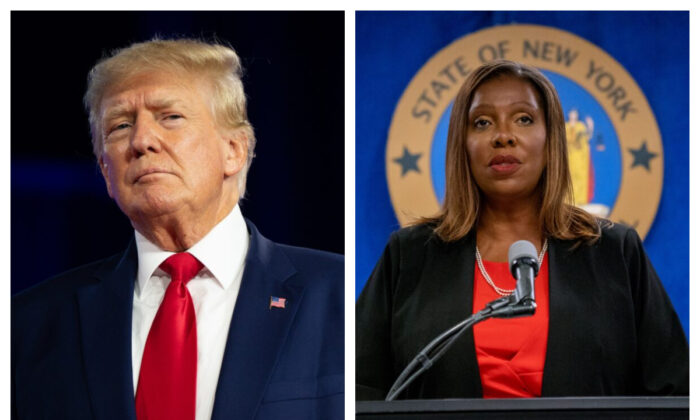 “It’s hard for me not to conclude it’s a political hit job,” Barr told Fox News. “This is a woman who campaigned for office promising she was going to go after Trump, which I think is a tremendous abuse of office to go head-hunting and targeting individuals.

“I’m not even sure she has a good case against Trump himself. So I think she was targeting Trump.”

“I think it will make people sympathetic for Trump that this is another example of people piling on because of ‘Trump derangement syndrome,’ you know, the strong desire to punish him,” he said.

“All told, Mr. Trump, the Trump Organization, and the other Defendants, as part of a repeated pattern and common scheme, derived more than 200 false and misleading valuations of assets included in the 11 Statements covering 2011 through 2021,” the lawsuit reads.

James’s office is seeking the company to pay a fine of at least $250 million while asking for a five-year ban on The Trump Organization from engaging in real estate acquisitions in the state, as well as barring Trump and his children from serving as officers or directors of any corporation in New York.

Barr said James’s decision to include Trump’s three children as defendants “grossly overreaches,” and such a move was proof that it was a “political hit job.”

“Yes, they had roles in the business, but this was his personal financial statement. It was prepared by the CFO, accounting firms were involved in it. The children aren’t going to know the details of that, and nor are they expected in the real world to do their own due diligence and have it reviewed independently,” he said.

Additionally, Barr said James’s decision to bring a civil suit, rather than a criminal suit, was significant.

“To me, that says she does not have the evidence to make a criminal case. So she’s setting a lower bar and bringing this civil case. I don’t think it’s going to go any further,” he said.

In response to James’s lawsuit, Trump attorney Alina Habba said in a statement that the legal action was politically motivated.

Donald Trump Jr. took to Twitter to fire back at James.

“Letitia James doesn’t care about the law. She’s a Dem activist, who only cares about politics,” Trump’s eldest son wrote, before pointing to a recent poll showing James trailing in the New York attorney general race in November. “So she’s now desperately trying to fire up her leftwing base with this [expletive]. This is ALL politics, nothing more. Disgraceful!!!”

The poll (pdf), conducted by the Trafalgar Group and InsiderAdvantage, shows James with 43 percent of the vote, trailing Republican candidate Michael Henry by 1.2 percentage points. A total of 1,091 respondents were polled, and it was conducted for two days ending on Sept. 1.

“Republicans are going to surge to victory across New York because hardworking New Yorkers are tired of corrupt Albany Democrats putting their own deranged anti-Trump obsession ahead of supporting law and order,” Stefanik wrote.