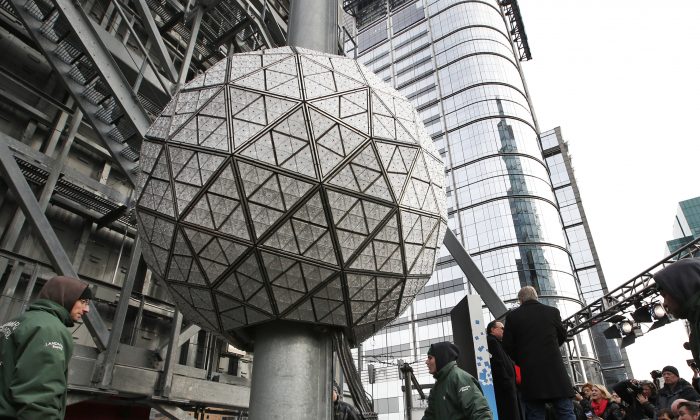 Workers prepare to test the Waterford crystal ball for the New Year's Eve celebration atop One Times Square in New York, Tuesday, Dec. 30, 2014. The ball, which is 12 feet in diameter and weighs 11,875 pounds, is decorated with 2,688 Waterford crystals and illuminated by 32,256 LED lights. (AP Photo/Kathy Willens)
US

New Year’s Eve is here and people are wondering how to watch the ball drop in Times Square without actually being there.

Fortunately, there are a number of methods to do exactly that.

Several live streams are available, including the official stream from the Times Square Alliance.

The official stream will start at 6 p.m. EST and last until just after midnight.

The commercial-free webcast will feature a number of musical performances such as O.A.R., Taylor Swift, and the American Authors, along with other entertainment.

Check out the stream on the official website, or embedded right below.

As usual, EarthCam is providing a live stream of Times Square, including different angles of the action. However, these streams are of a lower quality than the official stream.

For those watching on regular television, ABC will be broadcasting the event starting at 8 p.m.

Mobile users will also be able to tune in via the Times Square Ball app.

Roku owners will not be able to access the official stream, but should be able to tune in by adding Nowhereman’s Ustream channel to their Roku.

Apple TV owners will be able to tune into the official stream by opening the Ustream site on their iPad’s Safari browser.

Chromecast owners will be able to access the stream via their mobile Chrome browser. They then need to click on the Chromecast icon.

Parents who want to put their children to bed earlier than midnight can utilize Netflix’s short video that features a countdown to 2015 that can be played at any time.