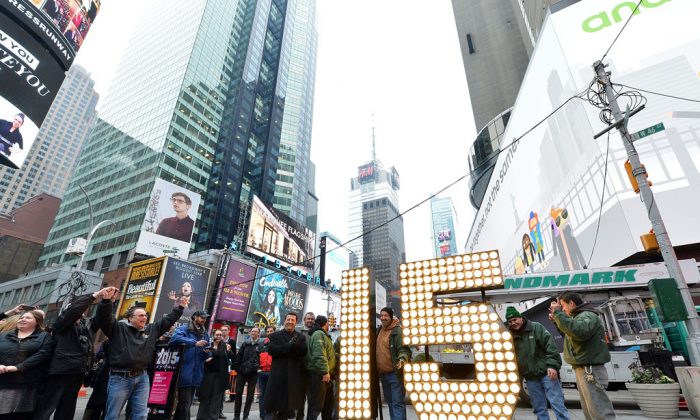 Minutes before midnight, people in cities around the world look up to wait and watch some odd thing drop slowly to mark the countdown to the New Year.

In Boise, Idaho, a 17-foot-long lit-up potato was dropped last year. In Panama City, Fla., an 800-pound, lit-up beach ball is lowered. In a tiny town in North Carolina a live possum in a Plexiglas cage is lowered, then set free afterward.

The New Year’s tradition started right in Times Square, and the iconic New York City event has grown to attract about a million spectators on site, and nearly a billion more watch the televised event.

But this year in the city, Brooklyn will be hosting its first ball drop in Coney Island to signal the start of 2015, complete with fireworks and sideshow performers.

Brooklyn Borough President Eric Adams had made it a promise since before he took office. “Now that we have our very own seaside ball drop, why be squished like a sardine in Times Square when you can rejoice like royalty in the County of Kings!” he said in a recent press release.

So as the summer season wound down, neighborhood stakeholders came together to plan the first annual ball drop.

The 262-foot-tall Parachute Jump in Coney Island was built as an amusement park ride for the 1939 New York World’s Fair, according to a paper written by Coney Island historian Seth Kaufman. Eleven parachutes of different colors dropped and lifted riders and it was once the site of a wedding.

Three years later it was moved to Brooklyn as a part of the Steeplechase Park amusement park. The structure, which has been called the “Eiffel Tower of Brooklyn,” ceased to be a ride in 1964 when the park closed.

Today the Parachute Jump is covered with 8,000 LED lights and lit up in various configurations for different events.

On New Year’s Eve, the lights will be programmed to simulate the digital ball drop. Then at midnight, the 10-minute fireworks show begins.

Johanna Zaki, executive director of the Alliance for Coney Island, said it has its fingers crossed for several hundred people to come to the first event this year.

The programming is much like what Coney Island puts on every summer, so it started with what it knows. But the goal is to grow and enhance the New Year’s ball drop every coming year.

Marie Rivera, a 60-year resident of Coney Island isn’t big on celebrating New Year’s Eve, but said this could persuade a new tradition.

“I think it’s very good, I can go with my mom and with the family, with my brother when he comes from Staten Island. I’d love them to put it on,” she said.

After a walk by the park, Rivera pointed out the boardwalk stores and how many of them her father had worked in at some point in time.

The residents enjoy having the beach and boardwalk in their own backyard. Rivera said she likes the idea of being able to step out to see the ball drop and still get home without a one-hour trek in the cold.

It’ll be a different vibe and crowd than Times Square, Rivera said, but she’s excited.

Festivities begin at 9 p.m., and a couple of shops by the boardwalk will still be open.

Billy Lala, manager at the Luna Park Cafe, said he’ll be in the shop for New Year’s Eve, ready with pizzas for the midnight spectators. And from behind the counter, he has a view of the Parachute Jump.

The notion of dropping a ball to keep time began in the early 19th century, according to a paper co-authored by historians Ian R. Bartky and Stephen J. Dick. They had uncovered archival evidence that the first ball was dropped at Portsmouth, England, in 1829.

The purpose was to give a visual signal that could be used to rate time-keeping tools. In 1845, the U.S. Navy installed a time ball at the United States Naval Observatory to do the same, every day at noon.

The Times Square tradition started in 1907, with a big wooden ball to be lowered on a flagpole as the city approached 1908.

A few years ago, the New York Times’ owner Adolph Ochs had moved the paper’s headquarters to a tower at the intersection of Seventh Avenue, Broadway, and 42nd Street. It was 1904, and the district was renamed Times Square from Longacre Square.

The city’s first subway line had opened that year, and over 200,000 people gathered for fireworks and a party that could be heard from 30 miles north along the Hudson River, according to the Times Square Alliance.

Fireworks were banned two years later, but the parties continued. Since 1907, there have been seven versions of the New Year’s Eve Ball.

The first ball was built by a metalworker named Jacob Starr, and it was made of wood and iron with 100 25-watt light bulbs. For about a century, the sign maker company Artkraft Strauss was responsible for lowering the ball.

Brooklyn Borough President Eric Adams had made it a promise since before he took office.

In 1920, the ball was replaced with one made completely of wrought iron. In 1955, it was replaced with a much lighter aluminum ball. In the 1980s, the lights were made red and green to turn the ball into an apple for a marketing campaign that lasted for seven years. In 1995, a ball of aluminum, rhinestones, strobes, and computer controls was made.

In 2000, the ball was given a complete redesign by Waterford Crystal and Philips Lighting. In 2007, the technology was upgraded for the drop’s 100th anniversary to enhance color, brightness, and energy efficiency. It was 12 feet in diameter and weighed nearly 12,000 pounds.

Today there are 2,688 crystal triangles illuminated by 32,256 LED lights, and the sparkling orb is on display all year.

For 2015, 288 of the triangles have been cut in the diamond Gift of Fortitude design to represent resolve, courage, and spirit necessary to triumph over adversity.

The remaining crystals have wedge cuts, representing the Gift of Imagination design the makers hope will inspire viewers.

As the year winds down, New York skies will be cloudy with flurries into the night. According to Accuweather, highs will be in the mid-30s and lows will be in the mid-20s, but could feel as cold as 20 degrees Fahrenheit. Winds will be at about 8 mph, with gusts up to 24 mph.

There won’t be snow at midnight, but bundle up if you expect to watch the ball drop in Times Square.

The coldest ball drop was in 1917, when the midnight temperature was 1 degree Fahrenheit. The temperature only reached 6 degrees on that day.

Weather.com said the worst year to watch the Times Square ball drop was 1975, when the midnight temperature was 34 degrees with steady rain and winds at 18 mph.

At midnight, colorful pieces of confetti flutter down on the Times Square crowd. If you look closely, there is a wish written on each piece of paper.

At the Times Square Visitor Center (between 46th and 47th streets) visitors write their wishes on colored pieces of paper to be stuck to a wall of Hopes & Dreams.

People can participate globally and virtually as well. The Times Square Alliance website has an online wishing wall to encourage people to share their hopes and dreams for 2015, along with their place of origin, to be written onto a piece of confetti as well.

“Be a part of this most magical night by sharing your New Year’s wish with us below and we will add it to the thousands of others dropped in Times Square at midnight on New Year’s Eve,” the website states.

Time balls were used in the United States beginning in the mid-19th century. Time zones had not yet been established, so time balls used as telegraphic signals between the Western Union Building in New York City and the Naval Observatory in Washington were issued 12 minutes apart to take the longitudinal difference into account.

By the turn of the 20th century, time balls were being dropped in cities worldwide.

In the United States, the first time ball was dropped at the request of the secretary of the Navy in 1845, primarily for setting time in Washington and for ships on the Potomac to set their chronometers.

It was dropped every day at noon from the U.S. Naval Observatory’s site at Foggy Bottom until 1885, when it was moved to the State, War, and Navy Building beside the White House. The last ball drop was in 1936.

Today the observatory maintains the Master Clock of the United States.